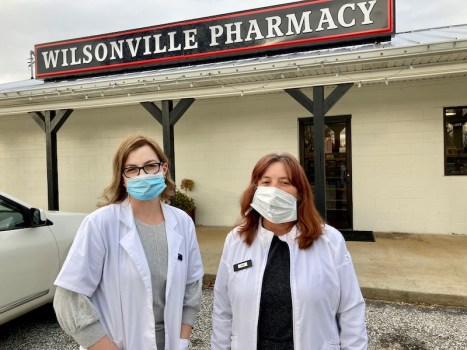 Owner and Pharmacist Jennifer Setzer-Polek and Pharmacy Tech Pam Heath stand in front of Wilsonville Pharmacy, an independent business that opened in the middle of the COVID-19 pandemic. (Reporter photo / Scott Mims) 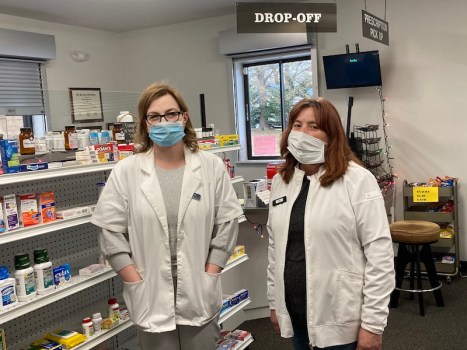 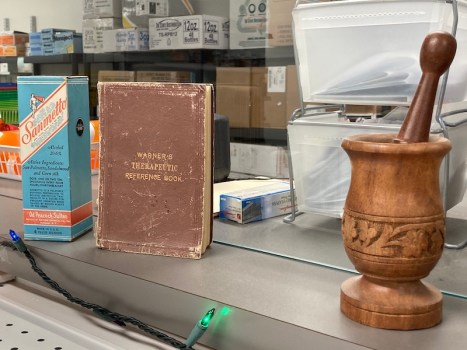 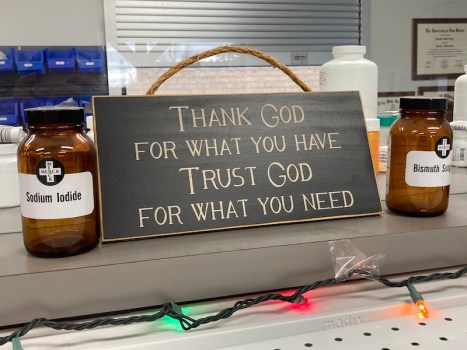 WILSONVILLE —Jennifer Setzer-Polek thumbs through an old pharmacy book that sits in the front window of Wilsonville Pharmacy. It is not just any old book—it once belonged to her father, Jim Setzer.

Jim was a career independent pharmacist, and Jennifer is the only one out of three siblings to follow in his footsteps. After opening a small-town pharmacy in Ragland, Alabama, Setzer-Polek discovered Wilsonville—a town similar in size—did not have its own pharmacy.

Wilsonville Pharmacy opened in late May 2020, in the middle of the COVID-19 pandemic, at a time when many people were adjusting to life spent largely at home and, if they were fortunate, at work.

“I came here because there was not another drug store for a 20-minute round trip,” Setzer-Polek said. “We’ve had really good response from the community. People always tell us, ‘We’re so glad you’re here. It’s so much more convenient.’ We hear that almost on a daily basis.”

She said moms in particular love going through the new drive-thru at the side of the building, one of several adjustments Setzer-Polek made in order to maximize the space the pharmacy occupies. She has also placed chairs and stools to provide waiting areas, and has taken care to divide the pharmacy into all the major departments one would find in a chain store—vitamins, cold and allergy medication, first aid, etc.

“That’s what independents really are, is customer service,” she said. “We try to make it comfortable to get in and convenient to go through the drive-thru, and when you call you can talk to a person.”

While it can be tricky to confirm face ID in an era where people are wearing face coverings, the atmosphere of small-town pharmacies like Wilsonville’s allows the pharmacist to get to know their customers on a more personal level—she learns their children’s names, their pets and other details that come up in everyday conversation.

This also works the other way around, Setzer-Polek said.

Setzer-Polek, who previously worked at a chain store, appreciates the independent pharmacy not only for that reason but also because she feels she is continuing her father’s work.

“He also worked for a hospital pharmacy, but independent was where his heart was,” she explained.

While thumbing through the aforementioned book, Setzer-Polek pointed out that the author was from New Mexico, where she herself earned her Pharm. D. from the University of New Mexico in Albuquerque. Setzer-Polek went on to earn her MBA from Troy, and currently lives in Birmingham.

“I’ve always enjoyed pharmacy,” she said. “People have been very good to us and very welcoming. We’re really happy to be here. It’s a really great town.”

Wilsonville Pharmacy is located at 207 Weldon Street in Wilsonville and can be reached at 205-671-5270 or Wilsonvillepharmacy.com. 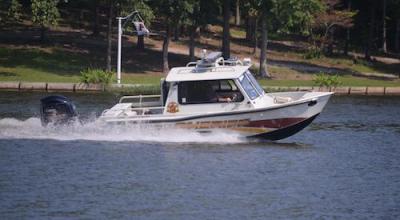