Columbiana leadership looking ahead to 2021 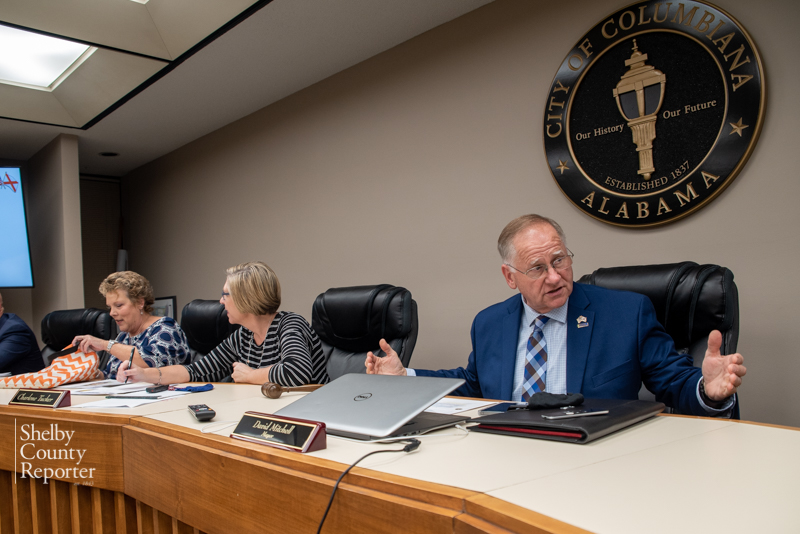 Mayor David Mitchell and the Columbiana City Council seem optimistic about what 2021 and the current term will bring to the city. (Reporter photo / Keith McCoy)

COLUMBIANA — New Columbiana Mayor David Mitchell and the City Council seem optimistic going into 2021, and members of the administration have shared their priorities as they look ahead to the new term.

Mitchell and the Council—which comprises the newly elected Karen Lilly, Vickie Mizzell and Ashley Phillips, alongside incumbents Kim King and Ricky Ruston—are making economic growth a priority as the city recovers from the impact of the ongoing COVID-19 pandemic.

Mitchell developed a 100-day plan before assuming office, which is available on the city’s website at Cityofcolumbiana.com/wp-content/uploads/New-Mayors-100-Day-Plan.pdf. He indicated that he wants to be held accountable for getting it done.

Mitchell, who campaigned heavily on economic growth, said he wants to get the city’s economy back on its feet quickly. He mentioned the possibility of hosting an economic development workshop and forum at Old Mill Square during the first quarter of 2021 to use as a springboard for a long-term strategic growth plan.

“I am eager to work with a cross section of city leaders, businesses and residents to develop a long-term vision for the city and a strategic plan to implement that vision,” Mitchell said.

Other priorities include planning for the new year’s events and holidays, and bringing together business leaders and the new administration to work together for everyone’s mutual benefit.

While some of the city’s new plans and initiatives are not ready for prime time, Mitchell added, he said people should soon see the fruit of those efforts.

“Concurrently, we will develop and implement a city marketing plan so that the whole world can see the great things going on in Columbiana. Then, I look forward to having to solve the resultant traffic problem,” Mitchell said.

Councilmember Karen Harris Lilly said her main goal is to see the people of Columbiana work together as one. She also mentioned specifics like additional lighting, road upkeep and increased involvement with youth—particularly older youth.

“Excitement is there,” Lilly said. “That within itself is very important, involving the old with the new.”

Fellow Councilmember Ashley Phillips would like to see a new fire station that would serve the area along Alabama 70 across the railroad tracks. He also cited road improvements as an important priority.

“I think we’ve got a good group,” Phillips said of the new leadership. “The main thing is to make decisions based on what’s best for the city.”

Ricky Ruston, one of the council’s incumbents, wants to see more people attracted to Columbiana’s downtown area as the city recovers from COVID-19. He believes Old Mill Square will serve as an important piece to the puzzle, as the area becomes a hub for outdoor activities and events. New restaurants, Ruston indicated, are yet another piece to that puzzle.

“It’s a year coming forward with a lot of hope and a lot of energy,” he said. “We are trying to get a sense of normal.”

Kim King, the other incumbent, has begun her third term on the Council. She said she is excited about new housing developments and continuing growth. King also wants to see local merchants thrive.

“I want to see Columbiana continue to grow, and I want people to have more things to do in Columbiana,” she said. “We love Columbiana, and we want to continue to see it (get) better and better.”

Councilmember Vickie Mizzell wants to focus on what makes Columbiana unique, and to promote programs that benefit area youth as well as senior citizens. Mizzell also wants to see transparency in city budgeting and to see city leaders, business owners and residents unified to work toward common goals.

“We want things to be publicized, and we want people to know that they can be involved,” she said.