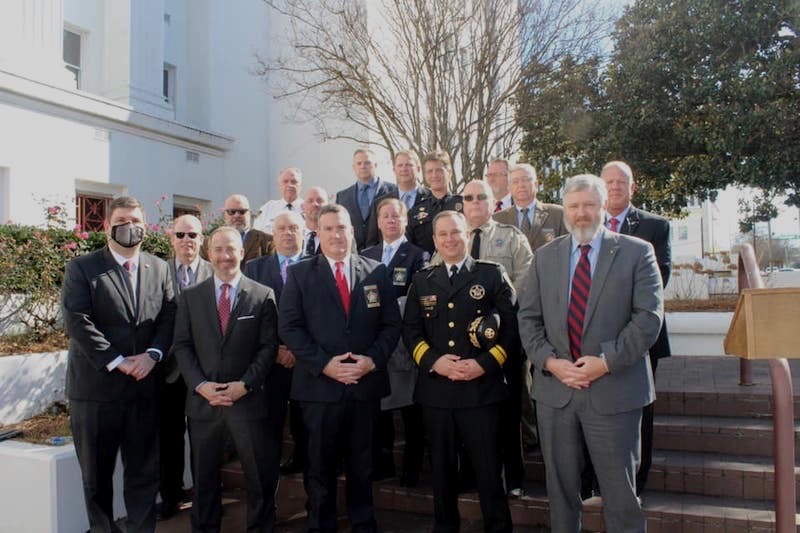 MONTGOMERY — First responders who suffer from job-related symptoms of post-traumatic stress disorder (PTSD) soon may benefit from a bill making its way through the Alabama Legislature.

Shelby County’s own Maj. Clay Hammac of the Shelby County Sheriff’s Office is among the key supporters of the bill through his role as chairman of the state’s Fraternal Order of Police Legislative Committee. Hammac participated in a press conference on the Alabama State Capitol steps Thursday, Jan. 28 to voice support for the measure.

The bill seeks to serve law enforcement officers and firefighters throughout the state by providing assistance to those who may develop signs and symptoms of post-traumatic stress as a result of a career in law enforcement or fire service.

The two primary organizations leading the drive for the effort are the Professional Firefighters Association of Alabama and the Alabama State Fraternal Order of Police, alongside Rep. Matt Simpson. The bill—the first of its kind in Alabama—has also received significant support from the Association of County Commissions of Alabama and the Alabama League of Municipalities. Similar bills have passed in several other states, Hammac said.

The part of the bill’s synopsis that perhaps best sums up its intentions is as follows:

“This bill would provide that a law enforcement officer or firefighter employed by a municipality, county, or fire district and diagnosed with post-traumatic stress disorder would be reimbursed for certain co-payments for treatment or would require a county or municipality to maintain sufficient coverage for the reimbursement of co-payments. This bill would also require counties, municipalities, and fire districts to provide disability payments or coverage for law enforcement officers and firefighters who are unable to return to work as a result of PTSD.”

The measure is being presented in both the State House and the Senate, and if passed in both, will be presented to Gov. Kay Ivey for her signature. The governor’s approval would mean the measure would take effect in January 2022, Hammac said.

Hammac compared the bill’s provisions to those of workman’s compensation, which kicks in if a firefighter or police officer is injured in the line of duty. Post-traumatic stress, he said, can have a negative impact on a first responder’s professional conduct as well as family relationships.

“If a responder encounters post-traumatic stress, we want to give them the opportunity without a financial burden on their family to seek professional help and guidance, and make sure they are healthy and well before they return to work,” Hammac said. “The spirit of this bill is for our first responders to recognize that it’s OK to say, ‘I’m not OK.’ No one calls 911 on a good day. Whenever we respond to a call, we are typically faced with tragic circumstances, many times death and tragedy. Over the course of a career, those events can compound themselves and before the first responder recognizes it, there could be indicators of post-traumatic stress that arise.”

In order to benefit from the measure, an individual would have to receive treatment from a licensed health care professional and must also meet a qualified diagnosis of PTSD, Hammac added.

He indicated that he is confident of the bill’s passage.

“I think it’s important for our first responders, specifically our law enforcement officers, to know that as a community we have asked you to sacrifice and selflessly serve and devote yourselves to your community, and that comes with a cost, not only to the first responder but also to their families,” he said, “and it is absolutely equitable for the community in return to say, ‘Thank you for taking care of us and now let us take care of you.’”

Treat a furry friend to a ‘Cup of Love’