Much has been said about the bond between a man and his dog. That bond goes to a whole new level, though, when you talk about a law enforcement officer and his K9 partner. The term “man’s best friend” is too clichéd to even begin to touch the depth of this bond.

When Dep. Rory Dempsey of the Shelby County Sheriff’s Office was partnered with Rocky, he likely knew somewhere in the back of his mind that he’d have to say goodbye one day. But no one could have guessed the journey that these two souls would make together, or the story they would write.

Rocky was born on Dec. 7, 2007. He was a black lab that came out of the Central Alabama Police K9 Association in Chilton County. Starting in 2008, Dempsey was one of three new K9 handlers under then Shelby County Sheriff Chris Curry’s tenure.

“Rocky was my first K9. He was my first narcotics K9, and he was a single-purpose K9, meaning that was the only thing he did—narcotics,” Dempsey said. “Rocky was matched with me because he was such a go-getter. He was high-strung, aggressive and Dep. (Allen) Morgan was the one who matched each K9 with each handler.”

Before starting his K9 training, Dempsey accompanied Morgan to see a group of puppies—which included the yet-to-be-named Rocky—to observe how they worked and how they were trained. He wanted a narcotics K9 to serve as another tool at his disposal in law enforcement.

One of the puppies ended up with a big scar on the left side of his snout, and a little droop under his left eye. The scar was from where his mother had torn into him. These defining features would play a role in naming Dempsey’s future partner.

“He looked like he had been through 15 rounds with Mike Tyson, so I named him Rocky,” Dempsey said.

At 4 months, Rocky was trained to sniff out marijuana, cocaine and methamphetamine. It was around that time Dempsey started bringing Rocky home with him each weekend, for the purpose of bonding.

“He would just bond with me and my family. At 5 months old, we both began our training together and we stayed together full-time,” Dempsey recalled.

Dempsey then started a 30-day certification process through Central Alabama Police K9. This included staged scenarios, building sniffs, vehicle sniffs and field sniffs. In each instance, a handler would hide a substance, whether it be marijuana, cocaine, meth, heroin or barbiturates. If the training took place in a building, there would be five or six rooms; some of these would be “dead rooms,” meaning no drugs were present.

“It was up to you and the K9 to alert whichever room the substance was in,” Dempsey said. “Dogs were trained to pinpoint the narcotics.”

By pinpointing, Dempsey meant that if the drugs were located in a cabinet, the dog’s nose would be on the cabinet. Dogs like Rocky are “passive alert” dogs, meaning they do not scratch or bark to indicate a find; instead, they would simply sniff and sit in front of their target.

To teach a dog new scents, the drugs would be placed inside of a PVC pipe with a cap on each end. The trainer would then throw the pipe, and the K9 would go get it and bring it back. Dempsey said a K9 can learn four new odors within seven to 10 days.

Dempsey said the four drive characteristics a dog must have to make a good narcotics K9 are: 1) trainability, 2) prey, 3) hunt and 4) air scent.

“Rocky was amazing. He was a go-getter. The bond that we built together was unexplainable. Nobody knows the bond a K9 and its handler has unless you’ve done it,” he said.

Dempsey personally did all of Rocky’s obedience training, and trained him on heroin and barbiturates. The training standards are high. He would get Rocky recertified each year, which consisted of rigorous courses for both the K9 and the handler—even though the state of Alabama does not have an official certification for K9s.

“It’s hard work,” Dempsey said. “You have to train them, you have to be dedicated. And you have to make sure that they’re safe. You’ve got to make sure all that’s clear of weapons and anything that could stick them or hurt them.”

But the payoff was high. Rocky would find drugs in the most obscure places—behind vehicle dashes, in steering wheel columns, behind radios, inside of medicine bottles hidden in purses.

Once, at a corrections facility, Rocky went up next to a wall and started dancing on two legs doing circles in the air. What officers discovered was an ounce of marijuana up in the rafters about 20-25 feet in the air.

“It was amazing,” Dempsey said, “He has found some drugs in locations where you would never believe.”

Dep. Dempsey and Rocky did demonstrations at elementary and middle schools, teaching kids about safety, drugs and what Rocky could do. They visited Boy Scouts, Girl Scouts, state and federal prisons, and universities.

In all, Rocky served for nearly five years from 2008-2013. After his retirement, Curry was kind enough to sign over Rocky to the family so he became Dempsey’s family pet—and it wouldn’t be a stretch at all to say family member. Rocky got a retirement cake, and received an Edgar’s birthday cake every year after that. 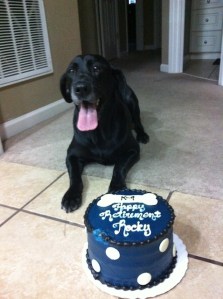 “He was my son,” Dempsey said. “I’ve got daughters, and I would always call him my son. You would hear me from time to time, ‘Son get over here.’”

Sadly, Rocky was diagnosed with cancer in 2020, and he had arthritis—the latter of which was the reason he had to retire. The cancer was found in his throat, and his quality of life was starting to go downhill dramatically so that he was not the same Rocky.
The arthritis progressed as time went on, and the last two days of his life, Rocky would not get out of his bed.

“We would have to pick him up, take him outside and bring him in,” Dempsey said.

He had to make the difficult decision to have Rocky put to sleep on Jan. 21. Rocky was 13 years old.

“It’s like a piece of me, gone. It’s like a family member, gone. And it’s hard walking in the house and not seeing him there because even though he was not working, he was always at that door waiting on me to come home, and he always slept between me and my wife,” Dempsey said.

Dempsey thanked Dr. Eric and staff at Chelsea Animal Clinic as well as Julie Bland of Pets at Peace for their support during a difficult time.

“As a patrol supervisor, it’s easy to recognize that there is an indescribable bond between a deputy and his or her K9 partner,” said Maj. Clay Hammac of SCSO. “To watch that friendship develop over the years is incredibly gratifying, especially when the K9 successfully contributes to the mission of the sheriff’s office. After a long, successful career with the sheriff’s office and a happy and healthy life at home, it was very sad to hear of the passing of Rocky but we were left speechless by the outpouring of support and warm thoughts from our community.”

The Dempseys also have Bella, a female lab, who is Rocky’s sister’s “grandbaby,” and Zoey, a Labrador mix.

Dempsey is currently assigned to patrol in the city of Chelsea.