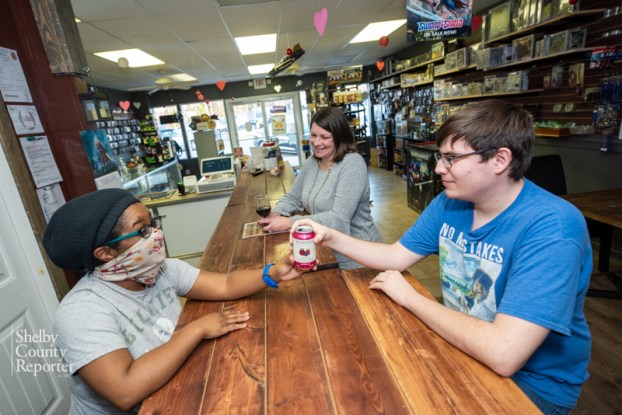 CALERA — Walk into any hobby shop and you’d expect to find tables of miniatures, a game of Warhammer in progress or perhaps trading cards. But a full bar? The owner of R.O.E. Hobby in Calera has found that a bar fits the atmosphere just fine.

Owner Tyneshia Rice—more entrepreneur than gamer—has spent enough time with her husband, Warhammer player T.J., to know that a game can take hours or even days to complete.
“These games are kind of long-term,” Rice said. “My husband’s core game is Warhammer 40K, and being in the Army when guys are playing, they have a couple of beers because you’re playing for 3-6 hours, so you’re staying in one place, you’re able to drink responsibly, that kind of thing.”

R.O.E. Hobby first opened in August 2019 off Shelby County 22. During the economic shutdown of 2020, they moved to their current location off Alabama 25 in historic downtown Calera next to Adventurer’s Coffee. In November, they received their ABC license and started selling beer and wine on premises.

“It’s been going well ever since,” said Rice, expressing appreciation to the City Council and Calera Main Street for their support during the process.

Needless to say, many first-time customers are surprised by the sight of the bar—but mostly it’s a pleasant surprise, said Rice. Parents hanging out while their kids play a three-hour game of Dungeons & Dragons can now have a beverage while they wait.

“A couple of people come in just to have a drink and enjoy the atmosphere,” she said.

One could even argue that the atmosphere of a hobby shop is perfect for a bar. The wooden bar at R.O.E. Hobby could evoke images of a medieval tavern in the storyline of a tabletop strategy game like Warhammer or D&D.

But anyone ordering a drink at the shop—even non-gamers—will find familiarity there as the bar carries mostly craft drinks from Alabama-based breweries and wines from local wineries.

R.O.E. is still looking to expand and plans to appeal to the ABC Board to be able to carry spirits, but current state classifications prohibit this as only lounges and restaurants by definition are allowed to serve spirits.

The shop has started hosting regular events including “Board Games and Brews” on Saturday nights and monthly “DIY and Wine” craft workshops for anyone who wants to participate.

“It’s a time to relax,” Rice said. “You’ll always find something going on.”
For those concerned about COVID-19, Rice said they regularly disinfect the game tables, which are big enough to allow participants to spread out and observe social distancing.

For others who may feel intimidated by the gaming atmosphere, Rice says the games are not as intimidating as they look.

“It’s a very inviting environment, and that’s what we strive for, that no matter your background, your interest, your ability level, everyone feels welcome here. Even when people are just checking it out, we’re starting to chat them up,” she said.

By ALEC ETHEREDGE | Managing Editor VINCENT – For a while, it looked like a 14-year streak was going to... read more