Sgt. Jud Barnes of the Shelby County Sheriff’s Office is the second SCSO officer this year to have to part with a longtime K9 partner.

Patrol dog Aksel, a German Shepherd who passed away Feb. 5, served from 2009-2015 and was the same age as retired narcotics K9 Rocky, who died in January. Both were 13 years old, and both had become close companions of their handlers and their families in retirement.

It was Aksel’s job to track and help capture the bad guys.

“He put his life on the line doing that to keep us safe so we didn’t have to go in there,” Barnes said. 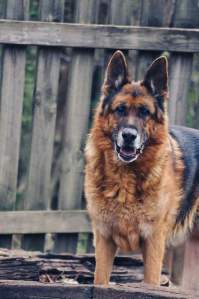 In his prime Aksel was 107 pounds, and his fur standing on end would remind Barnes of a lion’s mane. He could be intimidating even to other officers. But considering his role, he was exactly the right kind of partner for Barnes.

Anyone who wandered a bit too close to Barnes’ patrol car would find out rather quickly that Aksel was guarding the premises. If anyone came within a 10-foot radius of the car, Aksel would very vocally remind them that he was in the vehicle. An encroachment from as far as 15 feet out would result in growls.

When Barnes was searching for a K9 partner, he already had three years’ experience under his belt from another agency. He temperament-tested several local dogs but couldn’t find one that suited him well. That all changed when he first encountered Aksel online and picked him out based on video trials. Aksel came from a kennel located in Germany.

“The administration supported me in that decision and got him for me, and it was an amazing decision because that was the greatest dog I have ever seen in my life. We bonded immediately,” Barnes said. “The stars have to align because you have to have the perfect drives in a dog—prey, hunt and fight—but you also have to have a little bit of pack mentality as well so he will get along with your family.”

At 13 months, Aksel still had to undergo training. The first couple of weeks are primarily for bonding, followed by some light obedience training. Both Barnes and Aksel were highly motivated.

“You’ve got to make it fun for him so he will want to learn,” Barnes said. “He was so intelligent, he would pick up on stuff so quickly. He made my job easy.”

One of the hardest things to train is called a “recall,” Barnes explained. In this situation, if a suspect is fleeing the scene, the officer will give audible warnings that he is sending the dog to apprehend him. But, if the suspect then stops and puts his hands up, the handler must be able to call the dog back without the K9 engaging with the suspect. This can often take weeks or months to perfect.

“Aksel had it in a couple of days,” Barnes said.

That said, when it was time to engage, Aksel had no problem doing that either. A K9’s keen senses allow them to know when someone is afraid of them—and they can use that fear to their advantage.

“With his sheer size and how vocal he was, he would bark very loudly and scary; most of the time that was enough. He would never have to apprehend them; they would give up,” Barnes said.

Case in point—once Barnes and Askel responded to a fight in which a gunshot wound victim was lying on the ground unconscious. Multiple deputies responded to the scene and were surrounded by a throng of approximately 200 people, forcing them to call for backup. Once Aksel was deployed, he barked very loudly allowing officers to get to the victim and provide medical assistance.
“It dispersed every single person in that area. He singlehandedly turned a very dangerous situation into a peaceful resolution,” Barnes recalled.

Throughout his career, Aksel was deployed numerous times with the Shelby County Tactical Response Unit and assisted in the capture of dozens of dangerous criminals. He was a model officer, as he earned back-to-back Top Patrol Dog awards at a statewide K9 seminar in 2011 and 2012.

On the flipside of that, Aksel would come home with Barnes and lie down with his two children, filling the role of family pet just as easily. He even befriended Barnes’ mother, who was normally fearful of large dogs.

“He immediately latched onto kids and loved them. He would sometimes go into my daughter’s room and sleep at the foot of her crib or under the crib,” he said.

Like all dogs, however, Aksel started to feel the effects of aging and like many German Shepherds, his hip started to go quickly. This was most evident when he would trip and favor one of his legs. Fortunately, upon retirement, Barnes was allowed to keep his dog—but the transition from patrol dog to full-time family pet was not always an easy one. For the first few months Aksel would jump in the police car and would get confused and excited.

“After a little time, he started to lose that edge he had when he was working and just became a family dog,” Barnes said. “His spirit was still very strong so he kind of pushed through it all.”

In the last 60 days, he started falling and his quality of life started to diminish. Because Barnes wanted Aksel to go out with dignity intact, he had to make the difficult decision to part with his longtime partner and friend.

“It is with great sadness that we announce the passing of our beloved retired K9 Aksel at the age of 13,” read an official post on the SCSO Facebook page. “He played an important role in making our community a better and safer place for our citizens to live. K9 Aksel was a great and valuable member of our department and will be sadly missed.”

Barnes thanked Dr. Tony Wright and Cahaba Valley Animal Clinic, which has taken care of all of SCSO’s dogs. Barnes currently works in the Investigations Division. 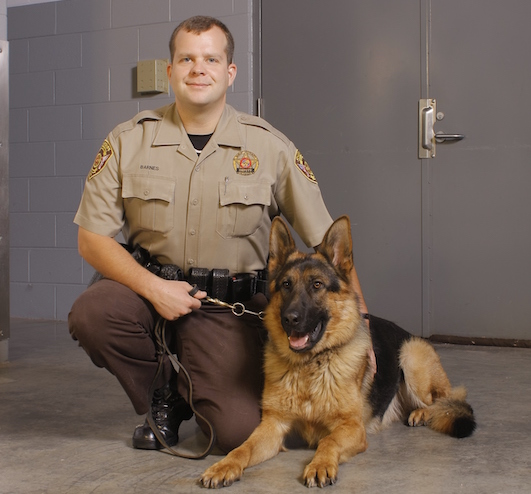