COLUMBIANA — A woman talks to neighbors in her front yard while the South Columbiana home behind her is missing its roof. Elsewhere in the city, crews with chainsaws move massive trees that came down atop vehicles.

As of Friday, March 26 at 4:45 p.m., the city of Columbiana was continuing to assess the damage from Thursday’s tornado, which struck in three different subdivisions of the county seat.

About 5:30 p.m. on March 25, the storm left a path of destruction along Mooney Road, along Alston Farm Road (off Shelby County 30), and in the area of Jonesboro Circle and Renes Road (which run parallel to Egg and Butter Road). 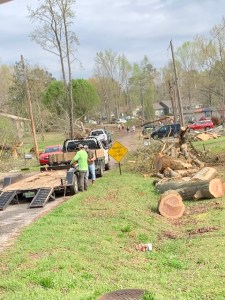 “This morning our city crews and county crews pretty much worked all night to try to clear the roads,” said Mayor David Mitchell. “An enormous amount of volunteers were helping with the cleanup efforts. After this initial cleanup, I expect there’s going to be a lot of work for a long, long time and some people are going to have more serious impacts as far as damage to their homes than others.”

Mitchell said he was praying that there would not be any fatalities or additional reports of injuries. There were reportedly two adults in critical condition as a result of injuries, but no updates were immediately available as of Friday afternoon.

The city is currently compiling a resource list through City Hall. Meanwhile, the Grande Hall at Old Mill Square opened its doors to anyone who needed immediate shelter, a place to charge their phone or use the landline, use the restroom or clean up. Donations of bottle water, bottled or canned drinks and pre-packaged snacks may be taken to the building to help those in need.

“Everything is moving in the right direction at this point,” said Columbiana Fire Chief Johnny Howard on Friday, adding that Shelby County EMA was still finalizing the number of homes damaged in the area.