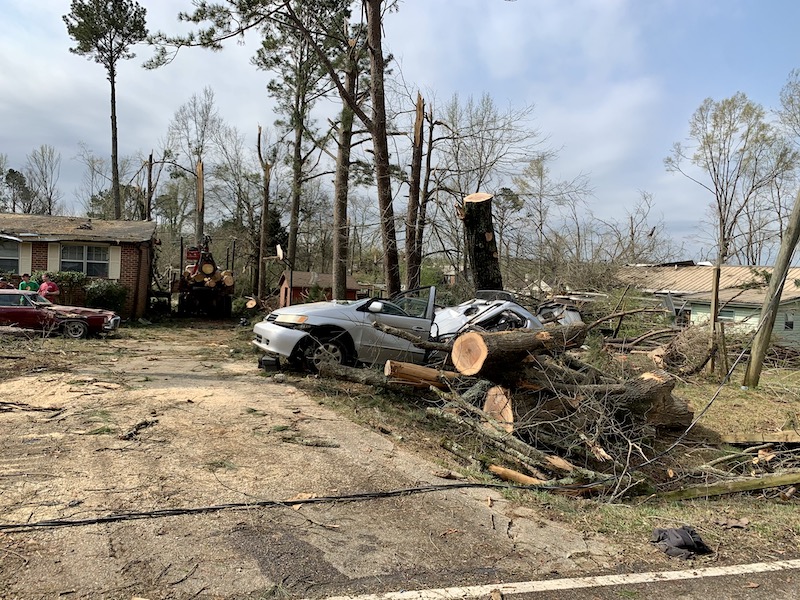 Mooney Road was one of the hardest hit areas in Columbiana during the March 25 tornado. (Reporter photos / Keith McCoy)

The tornado that ravaged parts of south Shelby County and left an 80-mile path starting in Hale County was upgraded to an EF-3 tornado, the National Weather Service confirmed Monday.

The statistic can be deceptive, however, because damage in the south Shelby County area from Calera to Columbiana was found to be more consistent with an EF-1 rating, according to NWS Meteorologist Gerald Satterwhite. This is because the storm weakened before it reached the county.

“A lot of homes were damaged but mainly by falling trees,” Satterwhite said. “There were a couple of structures that had some roofing blown off. It looks like the wind got into some vulnerable areas like some air vents or the garage.”

Satterwhite added that several mobile homes destroyed in the area were found to be unanchored. He said he spoke to several people residing in mobile homes who took cover in neighbors’ houses, a decision Satterwhite said was “definitely life-saving.”

According to NWS, the tornado’s lifespan was about 98 minutes, and the storm was up to 1.3 miles wide. The tornado was reportedly its strongest from Sawyerville in Hale County up to Centreville in Bibb County.

“The tricky thing with this one was it hit a lot of rural areas,” Satterwhite said. “An EF-3 ranking does not mean the tornado was an EF-3 the entire time; it refers to the area of heaviest damage.”

State Rep. Corley Ellis (R-Columbiana) said the south Shelby twister damaged more than 80 homes in the Columbiana area but resulted in no known loss of life. He said the experience of the storm barely missing his own home gave him “a whole new respect for mother nature and her fury.”

Added Ellis, “How blessed are we to have had this much damage and no loss of lives? It’s just a miracle, so we’re obviously thankful for that.”

Ellis said his group of volunteers had to retreat in the midst of assisting storm victims when the next tornado warning was issued, but when it came time to go out again, there were more people offering to help than needed.

“What a wonderful blessing that is to have that many people wanting to help their fellow neighbor,” he said.

For Columbiana City Councilmember Ricky Ruston, the storm hit extremely close to home—as well as that of his parents.

“I grew up on that street, at the end of Mooney Road. That’s a special place in my heart. To see it like that, that’s bad news. People work for that stuff all of their lives, and it’s taken away in a matter of seconds. That’s the biggest impact of it,” he said.

As the tornado passed over his home, Ruston said the sound was something he will never forget.

“It was a very distinct sound. To me, it was like a big machine, like you hear a big machine just humming,” he recalled. “It just came right over and in probably 10 seconds it was gone.”

Now city leaders are focusing on the ongoing cleanup and rebuilding efforts of homes in areas such as the Mooney Road corridor, Renes Road, neighborhoods near Shelby County 30 such as Stillwood Estates, and others still reeling from the storm’s impact.

“The city residents and people in surrounding areas have been very, very responsive since Thursday night,” Ruston said. “The devastation is tremendous, but it could have been a lot worse. The city’s thankful that it was nothing bigger than it was, and I hope the city gets its due of resources from the state and federal levels, because that’s what’s going to help.”