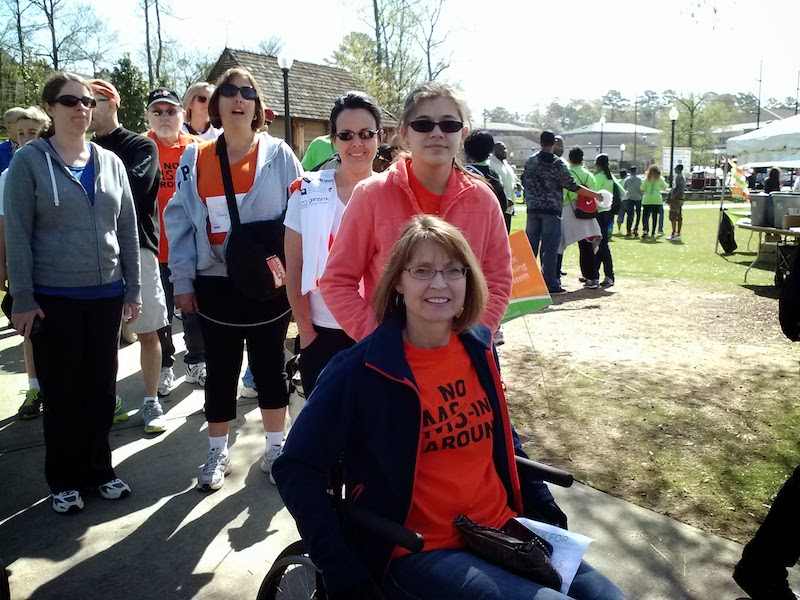 Ann Davis of Calera participates in a past MS Walk fundraiser. (Contributed)

CALERA — Ann Davis was attending pharmacy school at Auburn University when her first symptoms of MS started to appear—but it would be years before she would receive her diagnosis.

The first symptom was optic neuritis, when an optic nerve becomes inflamed. Davis described it like one eye going dark.

“When it happened, I was doing a rotation for pharmacy school. I was on an Indian reservation in Arizona, and it happened there, and I didn’t have any idea what it was,” she said. “With MS, things come and go a lot, like you’ll have a symptom for a month and then it will go away and you’ll be fine for a year.”

Finally, MS started to rear its ugly head all the time. Davis began to realize that she couldn’t walk well, and her left leg and foot would drag. But a trip to the neurologist just resulted in more questions when her MRI came back clear.

Davis’ trouble with walking continued, and in 2010, she went to the Mayo Clinic in Jacksonville, Florida. They conducted MRIs of her head and spine, and the damage showed up in the spine.

“They sent me back to Birmingham to a Dr. Riser,” Davis said. “She did a spinal tap on me and that’s how we confirmed my diagnosed of MS, but it took about 15 years to go from point A to point B. Had I been diagnosed earlier, I could have gotten a lot of better drug treatment that could have prevented this progression, and I probably wouldn’t be in this wheelchair.”

Davis’ own experience with MS is why she feels early diagnosis is so important—she advises people who feel that something is wrong, if they get normal results, to consider getting a second opinion. That’s also why she advocates for the National Multiple Sclerosis Society through fundraising and spreading awareness.

“If I had just advocated better for myself. I just didn’t, and I wish I would have,” she said.

MS, or Multiple Sclerosis, is an autoimmune disease that results in damage to the insulating covers of nerve cells in the brain and spinal cord, thereby disrupting the nervous system’s ability to transmit signals to different parts of the body. Davis said that for most people, symptoms occur in the 20s and 30s and many people are diagnosed in their 30s. It also seems to be more common in women than in men.

Davis describes the elusive symptoms of MS as “enough to make you crazy” because there is often no rhyme or reason to the occurrence of symptoms, and not everybody experiences MS in the same way.

“It’s all neurological. It’s an autoimmune disease that only affects your nervous system, and it shows up differently in everybody,” she said.

Davis worked as a pharmacist at Walmart for about 25 years and retired in November 2020, due in part to her worsening symptoms.

“MS has just messed by hands up. I couldn’t write really well anymore, I couldn’t really type fast enough to do my job,” she said.

But Davis is not finished writing her story—she continually promotes events that help spread awareness. Her husband, Bill, supports her in that effort and their 19-year-old daughter, Olivia, is studying neuroscience at Auburn and has organized a club that advocates for people with disabilities.

“They have people like me come and talk to them and teach them about different disabilities and what they can do to help people, and it has made her a stronger person,” Davis said.

Davis encourages people to donate to MS fundraisers, which benefit the local chapter of the National MS Society through projects like wheelchair ramps for patients. Donations also help fund research efforts, which is important because even though drug therapy has vastly improved, there is still no known cure.

In conjunction with National MS Awareness Month (March), Davis will have a booth at Calera Main Street’s First Friday event on Friday, April 2 from 5-8 p.m. Home décor shop plant is a partner in the effort, dubbed “MS Succs” and anyone who donates $10 to the MS Society will receive a succulent plant (hence the name).

Anyone unable to attend the event may donate to MS Walk on Facebook by visiting Davis’ page “Ann DeFreese Davis.”

“If I could find a cure, it would change my life forever, so that’s what I’m working toward,” Davis said.