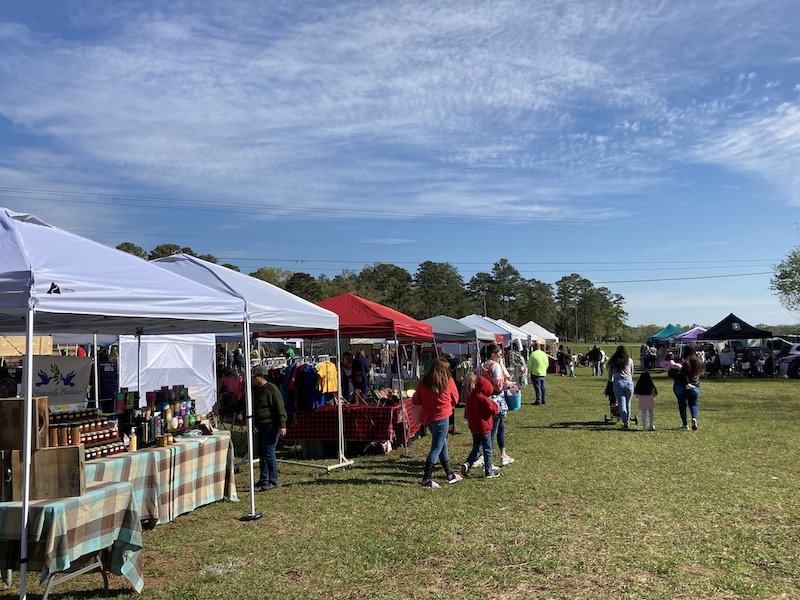 MONTEVALLO — The Spring Fling held Saturday, April 3 at the Medders Family Farm in Montevallo was a sure hit, as the event drew a much larger crowd than anticipated.

The Spring Fling—which serves as a fundraiser for the Montevallo High School Marching Troubadours band—made its debut in 2019 but had to be canceled last year due to the COVID-19 pandemic. This year, event hosts Chris and Ashley Medders were “blown away” by the event’s success.

“The crowd was probably 10 times bigger than we even expected,” Ashley Medders said. “Our estimates are between about 6,000-8,000 people. Our parking area stayed full. We still had 20 to 30 cars in the parking lot around 20 to 30 minutes after it was over.”

The Fling featured arts and crafts vendors, food trucks, homemade goodies for sale, live music and egg hunts for the kids. This year, even 4,000 eggs did not suffice for the number of visitors.

In addition, several food trucks reported selling out of food, and a couple even returned to town to purchase more ingredients. Several vendors sold out and left a few minutes early as well.

“It was amazing. Spring events don’t always bring that much of a crowd. I was in tears at the end of the day,” Medders said.

Medders, a former Marching Troubadour herself, said they were able to donate nearly $1,100 in cash proceeds directly to the band, and donations from vendors is expected to raise an additional $300-$500 through a planned raffle and auction.

Several band students and parents assisted with the Spring Fling, helping to park cars and organize egg hunts and other children’s games.

Medders thanked all who helped to make the fundraiser a success.

“I’ve always loved being able to work with the schools, but there is something special and unique about the kids at Montevallo,” she said.

The farm is planning a first-time summer event with food trucks, music and possibly an outdoor movie, Medders hinted. Specific details will be announced as the event draws closer.