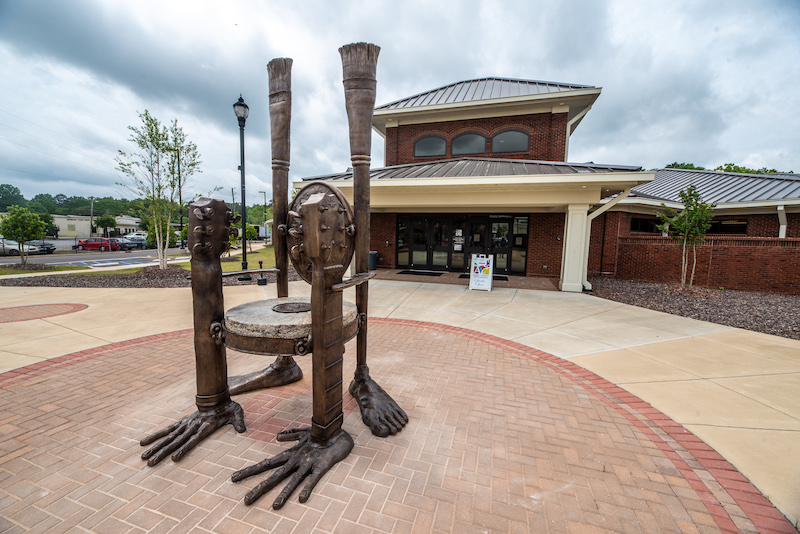 Nelson Grice’s sculpture, “County Seat,” stands near the entrance to the Shelby County Arts Council building. An accompanying piece, “Sustenance,” by Ted Metz, can be found outside the Grande Hall entrance. Both are crafted around millstones that were found when the site was being excavated. (Reporter photo / Keith McCoy)

COLUMBIANA — The concept of “county seat” has taken on a quite literal meaning for the city of Columbiana. A new sculpture outside the Shelby County Arts Council building, “County Seat” by nationally-known sculptor Nelson Grice, incorporates a millstone as the centerpiece of an actual seat.

Unlike most art, which tends to be viewed from a distance and cannot be touched, “County Seat” invites people to sit on the sculpture and have their photo taken, and is described by Grice as “whimsical” and “fun.”

“I envisioned that stone as being a place where you could sit, because Columbiana is the county seat of Shelby County. I thought, ‘How appropriate it would be if we could make that millstone a seat?’” said Grice. “An empty chair invites people to come be a part. It’s not just my sculpture, it’s not just a sculpture belonging to the council. It belongs to everybody, really.”

The sculpture is based on a chair that would have been popular around the time Columbiana was established, in the early- to mid-1800s. The back of the piece has a relief sculpture of the county’s original courthouse, which is in the roundabout on the south end of Main Street.

Perhaps the most striking feature is that the chair’s feet are designed after human hands and feet—Grice’s own, specifically—although they are much larger than their human counterparts.

Grice said the hands and feet are built for stability, both figuratively and literally: “That’s our foundation for all the things we do; our hands and feet. It tethers it to the landscape,” he explained. In addition, the chair’s back and front legs are formed into paintbrushes and guitar necks, respectively, to represent visual arts and the performing arts. In the center of the millstone, which functions at the seat, is a jester figure that is Grice’s logo and the title of the piece.

“When I create a sculpture, especially something that’s going to be so specific and something that’s a commission, I want to really do my research and I want to make sure that it covers all the bases,” Grice said in a SCAC interview. “There’s not going to be anything on that sculpture that’s not significant with Columbiana or that space or with me as the artist.”

It was Shelby County Arts Council Executive Director Bruce Andrews who enlisted Grice to produce the piece, when in 2019 two millstones were excavated from the property of the SCAC building and the idea of incorporating them into permanent sculptures in Old Mill Square Park became a discussion. Grice, in turn, contacted his mentor and well-known sculptor Ted Metz.

“Ted, it is safe to say, is an icon in the art world; he has public installations all over including Venice and Cortana, Italy,” Andrews said. “He is a retired art professor emeritus from the University of Montevallo. In other words, he did not have to take this job, but he did. So, each artist took a millstone and built a narrative around it significant to the history of the property.”

The accompanying piece, Metz’s “Sustenance,” which stands outside the Grande Hall entrance, follows a more serious narrative, Andrews said. It was installed without fanfare during the economic shutdown in the midst of 2020, whilst Grice’s sculpture was installed on April 29 of this year. Both were celebrated on May 2.

“Ted’s sculpture—if you look at the base of one of the elements of that sculpture you will see the words ‘agriculture, industry and art,’” Andrews noted. “Bricks in Ted Metz’s sculpture are taken from Shelby Iron Works and the design of the tower element of the sculpture is also reminiscent of design found at Shelby Iron Works. The idea that the millstone grinds grain to make bread is also clearly represented.”

Andrews also pointed out that Grice’s sculpture was cast and forged onsite in the metal Arts Foundry at the Shelby County Arts Center. Starting in June, the SCAC plans to start hosting workshops in which people can learn how to cast and pour metal from beginner’s level to intermediate to expert.

Andrews said he believes Columbiana can and will be an arts and cultural hub for Central Alabama and beyond.

“It is the goal of SCAC to infuse arts and cultural opportunities into the community in a sustainable way and in doing so, add lasting value,” he said. “We have leadership that understands that industry, art and recreation are all part of a very important mix to bring a great quality of life for all of us in Shelby County.”

On the tee: Celebrities take part in pro-am at…