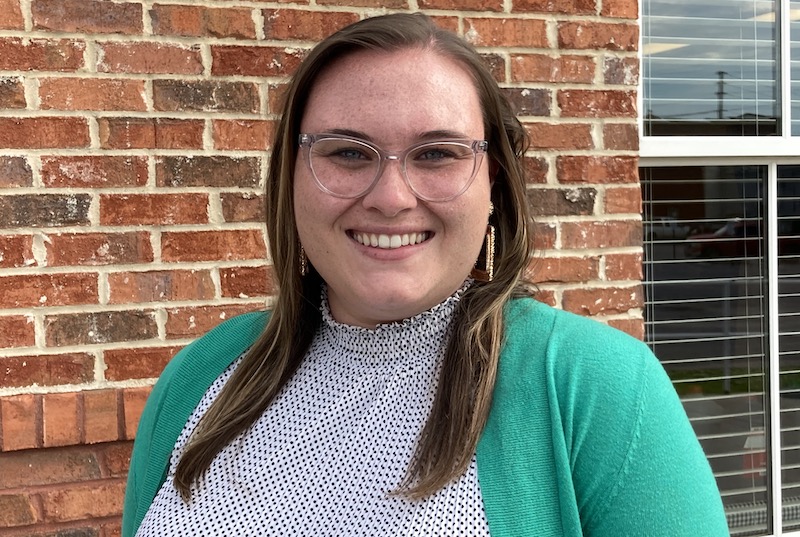 COLUMBIANA — Brittany Davis grew up in a small town and attended college in a small town—perhaps that’s why she is so fond of the Main Street program.

Davis was officially introduced in her new role as executive director of Columbiana’s Main Street program at a reception held Monday, May 17 at the Columbiana Senior Center.

The Guntersville, Alabama native and University of Montevallo graduate interned with the Montevallo Main Street program in her junior and senior years of college and has loved the program ever since.

In fact, it was a happenstance encounter with then Montevallo Mayor Hollie Cost while Davis was working at a local grocery store that led to her internship at the time Montevallo applied for its designation as a Main Street Alabama city.

“It was super fun. I loved it. I learned a lot, and I pretty much knew since then that I wanted to work for the Main Street program at some level,” she said.

Now, following a two-year stint with the Marshall County Economic Development Council, Davis finds herself back in Shelby County.

“I’ve always wanted to work in the public sector so I can kind of make a difference,” she added. “Growing up in small towns, I know how easy it is to kind of write them off, especially when you get to be about my age (26). You want something bigger and you want more things to do, and I have just always loved the Main Street organization at the national level and all the way down to the local level.”

Columbiana received its Main Street Alabama designation in 2016. The program went for a short time without a director, but the Main Street Board continued to meet during that time. Davis, who officially assumed her new role May 3, is the first full-time director and is also an employee of the city.

She is currently introducing herself to people in the community and listening to ideas of what kind of businesses both longtime residents and newcomers want to see come to the city. That said, while one goal is to bring more people her age to Columbiana, another is to establish common ground with everyone.

“One side of it is the revitalization and focusing on all that history that is in your downtown, and the other part is trying to bring in new businesses to those areas—filling in your empty storefronts, and if they’re not filled in, making them look more visually appealing so that people want to fill them in, and getting everyone in the Main Street district, and getting them all on the same page and on the same wavelength and just cohesiveness for that area,” Davis said.

Mayor David Mitchell said Davis will have some city responsibilities in addition to Main Street, such as marketing. Mitchell was part of a committee that selected her for the position; the committee consisted primarily of Main Street Board members and also included Community Relations and Senior Center Director Ali Payne.

“She brings a lot of experience relative to both Alabama Main Street programs as well as economic development as well as familiarity with the Shelby County area. We’re real pleased to have her,” Mitchell said.

Both Mitchell and Payne indicated the beginning of Davis’ tenure marks sort of a “re-start” for the program.

“We’re excited to have Brittany on board, and we’re happy to have her as she restarts the Columbiana Main Street program,” Payne said.