The Mission seeks to help those struggling with addiction 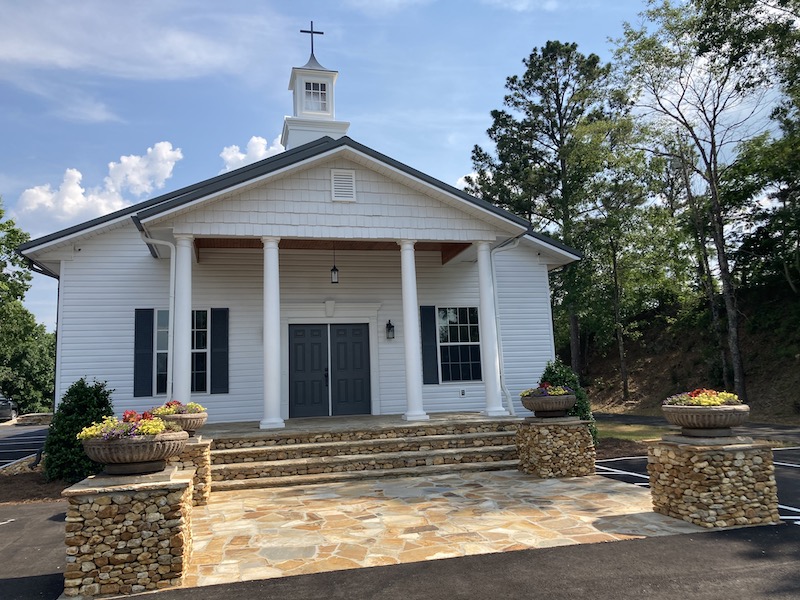 The central ministry of The Mission, a nondenominational church near Wilsonville, is a faith-based addiction recovery program. (Reporter photo / Scott Mims)

WILSONVILLE — Grady Covin won’t hesitate to tell you that he was once an alcoholic. What led to the dramatic change in his life is something he longs to share with anyone who will listen.

Covin, the pastor of newly-planted nondenominational church The Mission, has an unconventional approach to his new ministry—it is built around a faith-based addiction recovery program.

The Mission is based in a newly-renovated church building that sits atop a high hill off Alabama 25 just south of Wilsonville. In the foyer hangs a piece of artwork depicting Covin’s “life verse,” or passage of scripture he closely identifies with, 2 Corinthians 5:17—”Therefore if any man be in Christ, he is a new creature: old things are passed away; behold, all things are become new.”

Covin’s testimony begins when he was working in a coal mine. He had worked there for 32 years and was in upper management, but had moved up as far as he could go without a college education. So he went back to school, to UAB, and earned a degree in finance, graduating the same year as his daughter and son.

Between working full-time and being a full-time student, however, Covin was drinking every day. It all seemed to come crashing down when a management change resulted in a demotion for him; Covin and his new boss “had a bad history” which led to the move, he explained.

“It was at that time in my life I began to reevaluate it, and that’s when the Lord began to speak to my heart about my salvation,” Covin said.

One night on the way to work, Covin pulled over on the side of the road, bowed his head and asked God to save him.

“A few weeks later He called me to preach. I was so bad, so far away from the Lord, when I went home the next morning I didn’t even tell my wife (Patricia) I had been saved. I had told her so many times I was going to straighten up,” he recalled.

Eventually, she saw that something had changed. Covin started reading the Bible and one Sunday, he said he wanted to go to church with her. In disbelief, she wiped the fog off of the shower door and looked at him.

Covin’s first church plant was Mountainview Baptist Church in Chelsea, where he ministered from about 2007-2017. Prior to The Mission, he was in full-time evangelism and jail ministry.

At The Mission, he has partnered with Tim Lacy and Johnny Horton, the other board members. The first Sunday worship service was held May 23, and the first addiction recovery meeting is scheduled for Friday, May 28 at 6 p.m.

“The Lord put it on my heart to start an addiction ministry,” Covin said. “This program is unique in that it is for the entire family. We’re not a 12-step program; we’re a one step program. Of course the one step is to believe on the Lord Jesus Christ and become a disciple of Christ.”

The program utilizes the RU or “Reformers Unanimous” curriculum, which originated at a fundamental Baptist church in Rockford, Ill. After researching several curriculums and settling on RU, Covin flew up to Rockford and went through the training himself, and purchased materials.

“We actually planted the church with the intention for the church to grow from the addiction ministry,” he said. “The basis of the program is the Bible. We teach people how to walk with the Lord, how to study scriptures and meditate on scriptures.”

A key verse for RU is found in Galatians 2:20, the first part of which reads, “I am crucified with Christ: nevertheless I live; yet not I, but Christ liveth in me.”

Covin explained, “People are continually trying to stop their addiction in their own power, and it’s impossible, and that’s what this teaches is not to live it in your own power but to die to yourself daily and let the power of Christ live through you.”

The program meets at 26000 Hwy. 25 each Friday night at 6 starting with a free meal, followed by the program in the sanctuary. A nursery is provided.

The Mission’s Sunday schedule begins with Bible study at 9:30 a.m. followed by worship at 10:45 a.m.