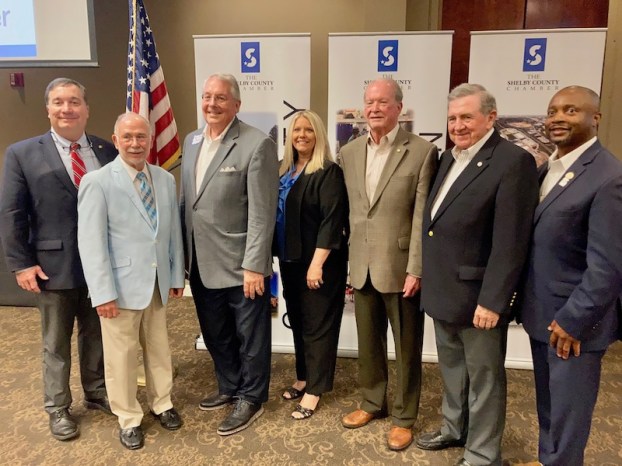 PELHAM — The Shelby County Chamber heard from five of its state legislators in a luncheon held Wednesday, May 26 at the Pelham Civic Complex.

Medical marijuana, a lottery/gaming bill and voting laws were among the subjects discussed, with the legislators representing different stances on certain issues.

“If you heard from mamas and daddies like I did about their son or their daughter and what marijuana can mean to them, how it helps their health, that’s the only thing that helps, it will bring you to your knees and you’ll get emotional hearing some of these stories,” he said, noting that a doctor, Sen. Tim Melson of Florence, helped introduce the bill.

“I talked to a lot of local physicians, people who use it in their practice in their states,” Waggoner said.

He said the past year saw about 400 bills passed, which is about 100 more than the usual number, most likely due to restrictions the previous year caused by the COVID-19 pandemic. That’s 400 out of about 1,100 pieces of legislation introduced.

“If we passed every bill, you would not want to live in Alabama, nor could you afford to live in Alabama,” Waggoner said. “Some of us pride ourselves in looking for bad legislation; that’s what I do as chairman of the Rules Committee.”

Sen. Dan Roberts of District 15 (Talladega, Shelby and Jefferson counties) expressed his disapproval with the marijuana bill and his support of a measure to ban the practice of curbside voting.

“We are all for voting,” Roberts said. “We had record votes cast in Alabama in 2020, and we are very proud of that…but one thing that we thought was not appropriate was moving the voting machines outside their designated areas.”

He also noted Alabama’s legislators are unlikely to pass a plain, simple lottery bill but could add full casino-style gaming to any outgoing bill.

“From where I sit, I don’t think we will ever have a true lottery bill,” said Roberts.

Another piece of legislation Roberts said was “near and dear” to his heart is the Alabama Business Competitiveness Act, which deals with “throwback,” defined as a “sale to nowhere,” i.e., a sale made either out of state or outside of the country for which tax is not needed.

“Prior to this, you paid taxes on that in Alabama as if you had sold it in Alabama. We no longer do that, which I think you’ll see will encourage manufacturing; it will encourage exporting and should be a big boon for our business community in the state,” Roberts explained.

He mentioned an amendment to a storm shelter bill pushed by the Shelby County EMA which allows people to receive a $2,000 tax credit if they choose to put a storm shelter in their personal home.

-The “Born Alive” bill, which states that a child born alive may not be aborted

-A number of bills dealing with violent offenders and providing more resources for crime victims, such as sexual assault survivors

-The Alabama state parks bond issue, which will help with repairs at Oak Mountain State Park in the wake of the March tornado.

Speaking across the board, Mooney said Shelby County has become a county that others in the state “both envy and hate” in a positive way.

Rep. Jim Carns of District 48 (Shelby and Jefferson counties) spoke of an amendment that will appear on the General Election ballot that forbids changes to voting rights laws within six months of a General Election.

“There’s still a lot of confusion nationally because of that,” Carns said.

The final speaker of the day was Sen. Jim McClendon of District 11 (Talladega, St. Clair and Shelby counties), who addressed county growth statistics and the 2020 Census.

On the other end of the spectrum were Dallas County at -20 percent, Macon County at -18 percent; and Choctaw, Sumter and Conecuh counties at -12 percent.

McClendon said he breathed a sigh of relief when Alabama did not lose a congressional seat and said statewide efforts to spur participation in the 2020 Census were “very effective.”