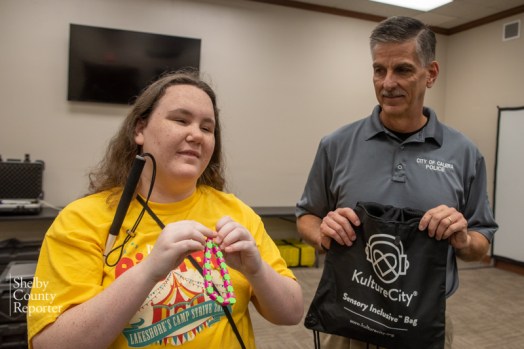 Calera Police Chief David Hyche is pictured with his daughter, Rachel. Rachel is showing off some items that all Calera police officers carry in their cars to help children find a coping strategy during stressful situations. (Reporter photo/Keith McCoy) 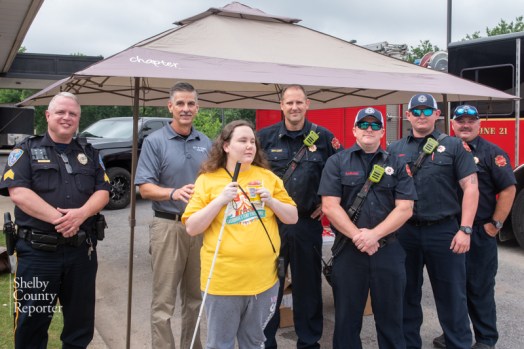 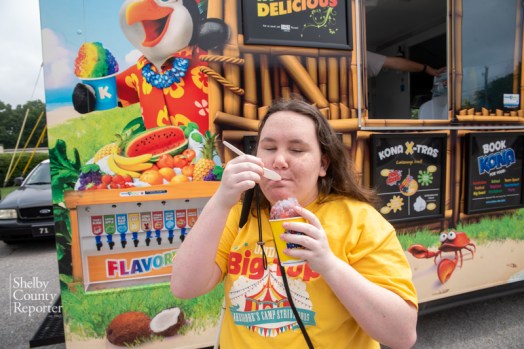 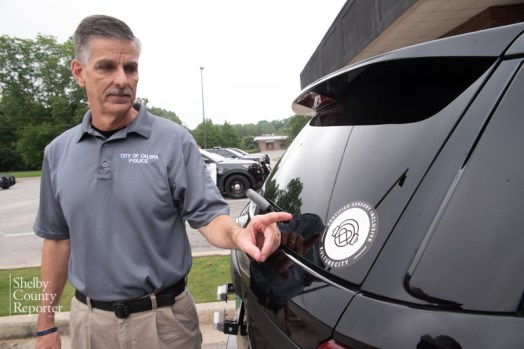 CALERA — As a father of special needs children, Calera Police Chief David Hyche is well aware of the importance of knowing how to communicate with special needs individuals. He wants Calera’s officers to have the same knowledge.

Calera Police and Fire departments hosted an open house Saturday, June 12 with a focus on children and adults with disabilities and their families.

Part of the inspiration for Saturday’s event was Hyche’s adopted daughter, Rachel, who is blind, Hyche said.

“When she was young, I took her to the fire station and had her around police officers and police equipment to get her more comfortable, because my fear was if there was a fire in the house and a firefighter comes in to rescue her and he’s got on all this equipment and this breathing apparatus making this noise that she might run away and be scared,” Hyche explained. “Today, with all of these special needs kids and adults coming to our department, it also educates the officers on what it’s like to interact with people with different needs.”

As part of that effort to further educate officers, Calera P.D. is contracted with KultureCity, an organization that trains first responders on dealing with special needs individuals. Each of Calera’s officers has a kit in his or her patrol vehicle containing different items that could prove beneficial to people with sensory and other needs.

For example, each kit contains a pair of noise-softening earmuffs for hearing-sensitive individuals, as well as cards that enable nonverbal citizens to communicate with officers by pointing at pictures. The department’s patrol vehicles also display a sticker on the back that identifies the officers have been trained by KultureCity and have tools to assist people with sensory issues.

“They provide a training program. It’s a tested program, and when you complete it there’s a certificate,” Hyche said. “We have a three-year contract with KultureCity, who supplied this to us free of charge. The training teaches our officers the different types of special needs, how to recognize someone that might have special needs, and to avoid a potentially use-of-force situation when it might be avoidable.”

Calera’s staff—not just officers but also dispatchers and office staff—started the training in June and are now 100-percent trained.

“We have a lot of walk-ins at the department; people that walk into the lobby needing assistance,” Hyche said, “The dispatchers are the first line. They’re on the phone with people in crisis, so they’ve had the training as well, and I’m very proud of our folks. We got 100-percent training in a week’s time.”

Rachel Hyche attended the open house with her father and said such events can help make first responders and special needs individuals more comfortable in situations where they encounter each other.

“Speaking as a blind person, I hear a lot of people talking about how they are hesitant to interact with people like police or the fire department,” she said. “People…think that they’ll be discriminated against because of their disability, and I think that doing things like this and making it much more available to learn and showing that these departments are so willing to learn is fantastic because it makes people feel more comfortable, and it shows these kind of people that they are approachable and that they are willing to learn and to figure things out and how to be helpful.”