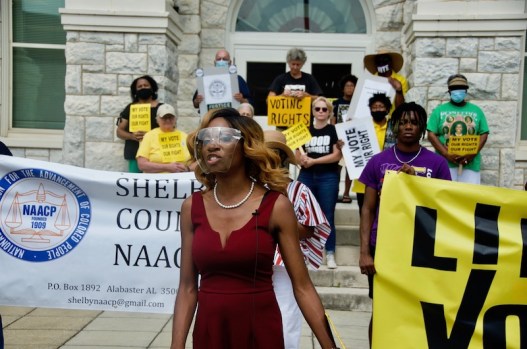 Jessica Fortune Barker, co-founder of Lift Our Vote and director of the Alabama Association for the Arts, speaks at Friday’s NAACP rally on the steps of the Shelby County Courthouse. (Reporter photo/Scott Mims) 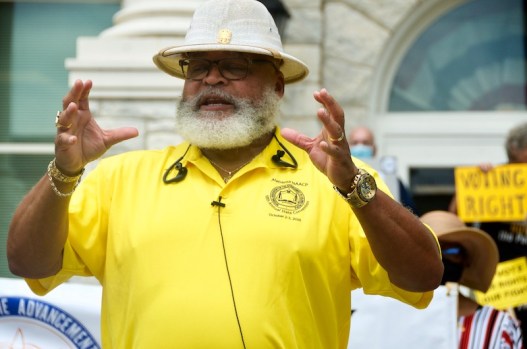 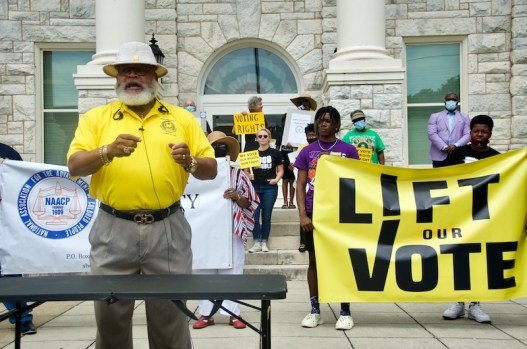 COLUMBIANA — For the eighth consecutive year since the landmark Shelby County v. Holder ruling in 2013, the Shelby County Branch of the NAACP gathered on the front steps of the Shelby County Courthouse Friday, June 25 to protest the gutting of the Voting Rights Act of 1965.

For the uninitiated, the U.S. Supreme Court ruling struck down a provision requiring that states and local governments obtain federal preclearance before changing the voting laws and practices of certain jurisdictions.

While the requirement itself is still outlined in Section 5 of the act, the ruling effectively nullified Section 5 by striking down Section 4(b), which included the formula used to determine which jurisdictions are subject to preclearance—based on each jurisdiction’s history of discrimination.

“We want to have early voting. We want to have same-day registration where people can register and vote,” said Bobby J. Pierson, first vice president of the Shelby County Branch of the NAACP. “Like I tell individuals, if your vote didn’t count so much, they wouldn’t try and take it away from you.”

Jessica Fortune Barker, co-founder of Lift Our Vote and director of the Alabama Association for the Arts, said she is calling for Congress to reintroduce the John Lewis Voting Rights Advancement Act in order to retore the provisions of the Voting Rights Act of 1965.

Barker condemned the “widespread (voter) suppression” seen across the nation she said is a result of the Shelby County v. Holder ruling.

“On the eighth anniversary, which is today, of that decision, we are calling on our residents across Alabama and across the nation to really pay attention to what is going on and what they can do to make sure their rights are protected,” Barker said.

“We’re calling the community to come out where they can check their voter registration status, they can register to vote, if they are formerly incarcerated they can speak with attorneys on hand to start the restorative process,” Barker said.

Also speaking at the NAACP rally was Rev. Carolyn Foster, one of the state chairs of the Alabama Poor People’s Campaign.

“Legislative actions and legal decisions at the federal and state level have severely restricted the ability of people of color and especially poor, Blacks, Latinx and native peoples,” she said. “Participation in the democratic process has been greatly impeded. We’ve been hearing about it. Voter suppression silences the people. It sequesters our power and it undermines the basic tenets of our democracy and human rights that are ours and is declared to us by the U.S. Constitution, which says, ‘life, liberty and the pursuit of happiness.’”