Calera restaurant Bertolone’s Classic Italian has started a fundraiser to help baby Benny Smith, aka “Benny the Brave,” who has severe symptoms caused by an apparent airway disorder.

Benny, short for Bennett, was born on March 18 to Justin and Emily Smith of Alabaster and was six weeks premature. Initially, air was trapped in the middle of his chest but this seemed to resolve on its own. He would choke on his bottles but the family was told this was normal. 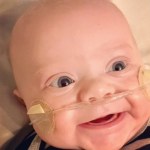 “We brought him home and he continued to choke, and he would also gasp for air in his sleep, and he would make really loud breathing noises like snoring,” said Emily Smith, who did research and found that Benny’s symptoms were identical to an airway disorder called laryngomalacia or a “floppy airway.”

“It’s like extra skin around the airway, and when they breathe that extra skin can fall over the trachea and obstruct breathing,” she explained. “It’s super common. It’s like the most common cause of noisy breathing in infants and sometimes doesn’t cause any issues, but in his case it does.”

Everybody kept telling the Smiths that Benny’s condition was normal, but Emily had a bad feeling it was not. He was not able to finish his bottles, he was tired from breathing, and a swallow study found that he aspirated everything. Pediatricians tried a slower flow and even thickening the liquid, and when that didn’t work, Benny had to have surgery for a G-tube.

In addition, a sleep study confirmed Benny stopped breathing more than 20 times per hour, so he has severe obstructive sleep apnea and now requires oxygen 24/7.

“He continues to have breathing episodes where his oxygen drops, and he will gasp for air and he just struggles to breathe. He’s also been running fevers for about three weeks straight now, and we have no idea why,” Emily said.

Because little Benny’s symptoms are very severe for his diagnosis, a scope of his airway was performed, but the only finding was a prolapsed epiglottis.

Now, the Smiths are trying to get Benny to Philadelphia, where they can take him to a world-renowned airway clinic.

“We’re hoping they will be able to give us some answers,” Emily said.

While the family raises money to fund the trip and Benny’s medical procedures, Bertolone’s owner Sonia Bertolone has started “Pasta With a Purpose,” a fundraiser in which 100 percent of the proceeds go toward the family.

Anyone can purchase a voucher for a spaghetti dinner for four at Bertolone’s for $40. The voucher is good for four servings of spaghetti and meatballs, tossed salad and bread. Meals can be picked up by calling the restaurant at 205-644-8780 and placing your order for the “Benny Family Special” 30 minutes in advance. Contact sonia@bertolones.com or EMBETH5@gmail.com to purchase a voucher.

“The owner has been nothing short of amazing,” Emily said. “She has really, really helped our family. She just cares so much about other people. She’s always trying to help wherever she can.”

Emily grooms Sonia’s puppy, and that’s how the two met. Sonia was touched by the family’s journey and felt the need to help.

“It breaks my heart,” Sonia said. “Their house was flooded when we had the big rain a few weeks ago, and it’s just one thing after another. I don’t know how else to help.”

The family has also benefitted from a foundation called Coping with LM, which offers a support group for parents. The organization sent Benny a care package when he was in the hospital.

Meanwhile, Benny’s older siblings—Jonah, 6, and Evie Sue, 3—are helping to care for him. Jonah drew a picture of a rainbow with the words “I love Bennett,” which now hangs above the inside of his crib.

For those who want to help the family, there are additional ways to help:

-T-shirts may be purchased for $20 through ByGeorgeUSA.com. The shirts read “Benny the Brave” and sport an airway disorder ribbon. The family receives approximately 50 percent of the amount. There is a direct link on the Facebook page Facebook.com/BennytheBrave21.

-A GoFundMe account has also been set up and is available at GoFund.Me/bc701e96.

Emily Smith has a word for the parents of any child with a medical condition:

“If you feel like something isn’t normal, even if the doctors are telling you it is normal, get another opinion because if we had kept on when they told us that it was normal, it could have been really bad for him,” she said. “Trust your mamma gut—it’s usually not wrong.”