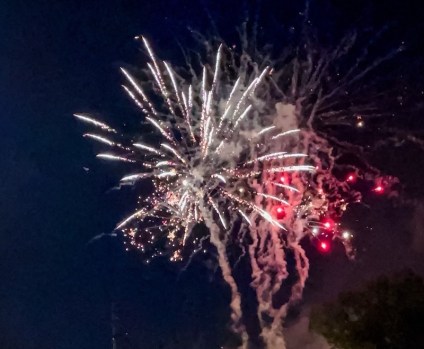 A fireworks display was a new addition to Calera’s First Friday festival series, the latest of which was held July 2. (Contributed) 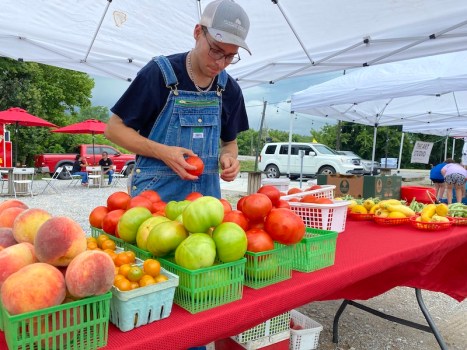 Bailey Boockholdt sets up for the Farmers Market portion of Calera’s First Friday event. (For the Reporter / Jackie Batson)

CALERA — The July version of Calera’s First Friday festival series on July 2 came with an added bonus—a fireworks show in celebration of Independence Day—something the city had not seen in quite some time, according to Calera Main Street Executive Director Jackie Batson.

All the action was centered at the Calera Courtyard, which is located behind the shops on Main Street and Alabama 25 and is accessible from 17th Avenue. The fireworks were set off safely between storage units in the area.

“It totally exceeded my expectations,” said Batson, who estimated well over 2,000 people attended the show. “It was just tremendous, and I woke up Saturday morning to people texting me, and I just couldn’t believe how much everybody online said they enjoyed it. We probably had 1,000 people around the Calera Courtyard, and others were as far as a quarter-mile away watching it.”

Main Street merchants and Calera Parks and Recreation raised the money to purchase the fireworks in just a couple of weeks’ time, following a brainstorming session in which the idea was raised. Batson indicated she thought the joy and excitement expressed by the community was symbolic of everything people had been through since last year.

“I’m really excited to see people getting out again and attending festivals and various activities,” she said. “I like to say that we’re creating community, that we have reasons for citizens to get together and come together downtown. We’re building Main Street to include places to eat, places to shop and places to hang out.”

She added that the fireworks will likely be a new tradition based on the positive reception to the new event.

“I think we’ve started something we can’t stop because it was so good we’ll have to see next year,” Batson said.