Fundraiser helps puppy who was thrown from vehicle 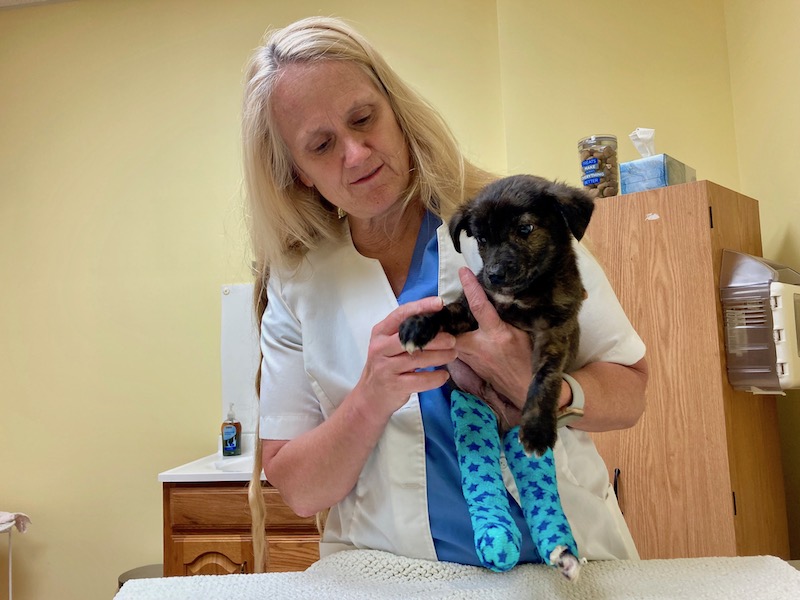 Dr. Rhonda Ellison of Calera Animal Hospital holds Ryder, who wears casts on both his back legs following surgery to heal three broken bones. Ryder was thrown from a vehicle in Randolph County. (Reporter photo/Scott Mims)

CALERA — A home health care nurse was driving in rural Randolph County, Alabama, when she noticed that something was thrown from the vehicle in front of her—upon realizing it was a puppy, she hit her brakes and immediately began caring for the animal.

The nurse called Tonya Thornton, who runs an animal rescue in Randolph County and happens to be a friend of Lauriann Loveless of Loveless Animal Rescue in Calera.

“In Randolph County, she’s overwhelmed. So we help her a lot,” Loveless said. “I asked her if she wanted help with this puppy, and of course she said, ‘Yes, yes, yes.’”

Loveless and her daughter, Karman, started rescuing dogs during the COVID-19 pandemic due to the great need they saw locally. They had been working with horses for years, but after taking in one dog they soon found themselves with 40. Lauriann takes care of the well dogs, while Karman tends to the sick.

The dog from Randolph County—a 6-week-old mixed breed—turned out to have three broken bones, all in his back legs.

“He was pitiful,” Karman recalled. “He was covered in road rash, he had fleas all over him and he was just the whole way home acting like he was worn out.”

“He was done,” Lauriann interjected.

But Loveless was just getting started. She immediately got to work setting up a Facebook fundraiser so that people could donate directly to Calera Animal Hospital to help Ryder—whose name came courtesy of Loveless’ 2-year-old grandson, Max. He named him after a character in one of his favorite TV shows, “Paw Patrol.”

Obviously touched by Ryder’s story, now that he had a name to go with his face, the community started donating like crazy.

“Our rescue, we work off donations,” Loveless explained. “We have to, and so I did a fundraiser thinking I’d get some. The city of Calera really showed off. They just pooled together. He became Calera’s puppy. We got donations from California, from overseas, from everywhere for this little puppy.”

Karman said Ryder looked better after surgery than he did going in, which is not typical of all animals. She said it looked like he had gained weight in the short time he had been at the hospital.

“Poor puppy, to be 6 weeks old and have three fractures. Can you imagine how painful that was?” Ellison said. “But, the little puppy is really resilient. He’s actually doing well a week after surgery. He’s eating, drinking exceptionally well.”

The hospital is holding Ryder for a week to treat him for pain and to administer antibiotics; then he will go back to Loveless. And the best part—he is promised to a loving family who has committed to adopt him. Billy, Christina and Kiera Booth found out about Ryder through the fundraiser.

“He landed in the perfect place,” Loveless said of the Booth family, who requested that they not be photographed. “They call the vet and check on the puppy. They are just phenomenal.”

When asked what might have been going through the mind of the person who threw Ryder from their car, Loveless could only speculate but said that unfortunately, his case was not the worst she had seen.

“They have to be in a dark place. They really have to be to the point that mentally they’ve lost touch with reality. I cannot imagine,” she said.

Loveless thanked the community for their donations and said she was “blessed” to have such an outpouring of support.

“Social media is our biggest tool,” she said. “This puppy made us not alone in this. Calera has really shown out for these animals, and Shelby County and Chilton County.”

Celebrate 2021 graduates with this special video