A shift in the order of the pageant world resulted in a new Miss Shelby County being crowned. Mary Coker Green, originally named first runner-up of Miss Shelby County 2022 on July 10, assumed the crown Thursday evening, Aug. 5 in a private ceremony in Columbiana.

Green, known to her family and close friends as “CoCo,” took over after the original title holder, Emma Terry, vacated her title in order to accept the role of Miss Alabama’s Outstanding Teen 2020. Terry will serve in that capacity until the next pageant is held in March of 2022.

Green was on her way to Auburn University to begin the first semester of her freshman year when she received the call informing her that she would become the new Miss Shelby County. 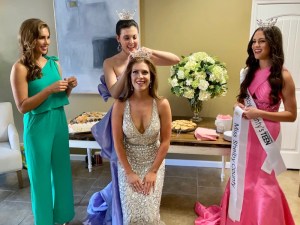 “My immediate reaction was just surprise and excitement that it was actually happening,” Green said, recalling the moment. “I have already felt very loved and overjoyed by this community, and I’m excited to spend the year with y’all.”

“The rules state that when a vacancy occurs, the title holder can no longer fulfill her duties. The first runner-up will assume the title,” explained Bragan Feldman, member of the Vignette Club, sponsor of the Miss Shelby County Pageant.

Terry said that tears of joy were streaming down her face when she received the news she would be representing Alabama as Miss Alabama’s Outstanding Teen. She also had kind words for her successor.

“I’m thrilled I have the opportunity to represent this state and serve the state of Alabama as Miss Alabama’s Outstanding Teen,” she said. “I was really looking forward to serving Shelby County, and that is probably the only thing about this is I do not get the opportunity to serve Shelby County as Miss Shelby County, but Mary Coker Green is going to be the best representative. She is such an amazing person and is so sweet, and I can’t wait to watch her thrive.”

Green was also named the talent winner in this year’s Miss Shelby County Pageant, following her fiddle performance of “The Devil Went Down to Georgia.”