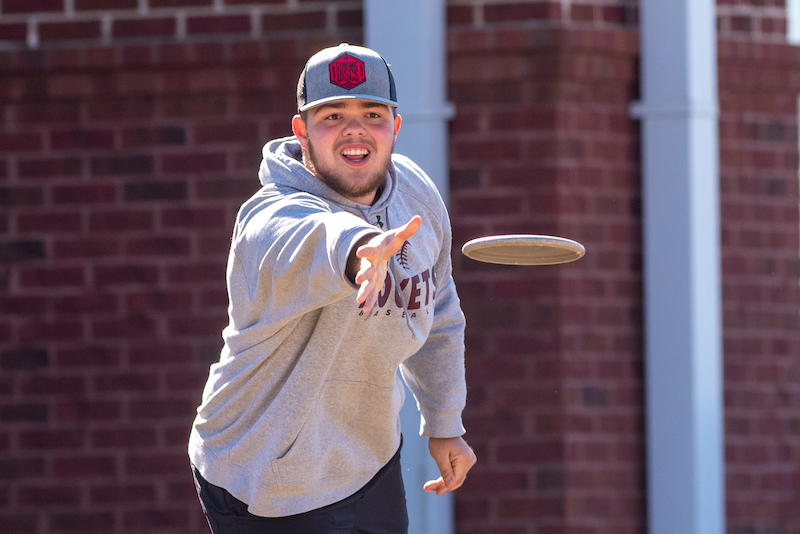 Disc golf continues to grow in popularity, and now the sport has been integrated into the annual Calera Goes Pink fundraiser. (Reporter photo/Keith McCoy)

CALERA — Disc golf has taken the world by storm since the beginning of the COVID-19 pandemic, and now playing the sport can help raise money for a worthy cause in the city of Calera.

Disc Golf Goes Pink is the latest addition to the annual Calera Goes Pink effort, which supports the Breast Cancer Research Foundation of Alabama (BCRFA). The event is slated for Sept. 18 at two city parks—Oliver Park and George W. Roy Recreational Park, both of which have newly constructed disc golf courses.

The tournament is presented by Ideal Insurance Agency.

“It’s a much less expensive sport than golf, and so it allows a lot more people to participate,” said Kate Kiefer, event coordinator for Calera Goes Pink and BCRFA board member. “We’re just trying to capitalize on the growth of this sport and the market it appeals to as a way to raise more funds for research.”

The tournament will begin Sept. 18 at 9 a.m., with check-in lasting from 7:30-8:30 a.m. Participants will play rounds on both courses, one in the morning and one following lunch. Times are subject to change, Kiefer explained.

Player fees are $45 per player and include a player’s pack featuring an event disc, T-shirt, specialty tumbler and more. Lunch will be available for purchase from food trucks onsite at each course. Following the tournament, an awards ceremony will be held at Oliver Park at 4:30 p.m. Awards will be given in every category that includes at least three players.

“This is our 11th year for Calera Goes Pink, and the city has raised more than $416,000 in 10 years. That money is donated to the Breast Cancer Research Foundation of Alabama. The BCRFA in turn sponsors research grants throughout the state,” Kiefer said.

Kiefer added that funding for breast cancer research in Alabama goes to UAB, the Mitchell Center in Mobile, Auburn University, and the HudsonAlpha Institute for Biotechnology in Huntsville.

The biggest fundraiser for BCRFA is the vehicle license plate program, which allows vehicle owners to purchase the special plates for an additional $50 on top of the base cost of each plate. The BCRFA tag is white with gray and features a pink ribbon.

Meanwhile, other events are planned for Calera Goes Pink including the Pink-Out football game Oct. 15 and the Calera Goes Pink traditional golf tournament Oct. 17. More details will be announced later.

To register for the tournament, visit Caleragoespink.com.