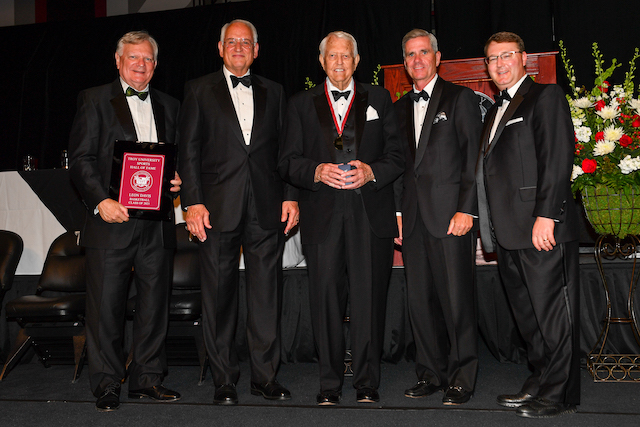 Leon Davis (middle) was inducted into the Troy Sports Hall of Fame class of 2021. (Contributed)

Troy welcomed Shelby County’s Leon Davis into the Troy University Sports Hall of Fame on Friday, Sept. 3 in front of a sold-out crowd in Trojan Arena.

Davis, who is already a member of the Montevallo Hall of Fame, Wiregrass Hall of Fame and the National Association of Intercollegiate Athletics (NAIA) Hall of Fame, is one of the early pioneers of Troy basketball.

“Tonight was a wonderful celebration as we honored nine of the all-time greats in the history of Troy Athletics,” Director of Athletics, Brent Jones, said. “On behalf of the athletics department and Troy University, I would like to thank our new inductees and their families for the tremendous impact they had in shaping the future of Troy Athletics.”

Davis was the president of his Troy senior class and was named team captain of the 1952-53 squad that finished 18–7 overall.

After his graduation in 1953, Davis served in a Special Services section of the United States Army and was discharged with the rank of Sergeant.

Davis went on to a tremendous career as a coach and athletics administrator.

He joined the University of Montevallo staff in 1964 as an assistant professor and became the school’s first men’s basketball coach. He then over the role of athletics director in 1969.

Davis played a key role at the national level. He served as the NAIA District 27 chairman for six years and served a four-year term on the NAIA National Executive Committee. He was named the NAIA President in 1982 and served on the United States Olympic staff for the World University Games in Edmonton, Canada.