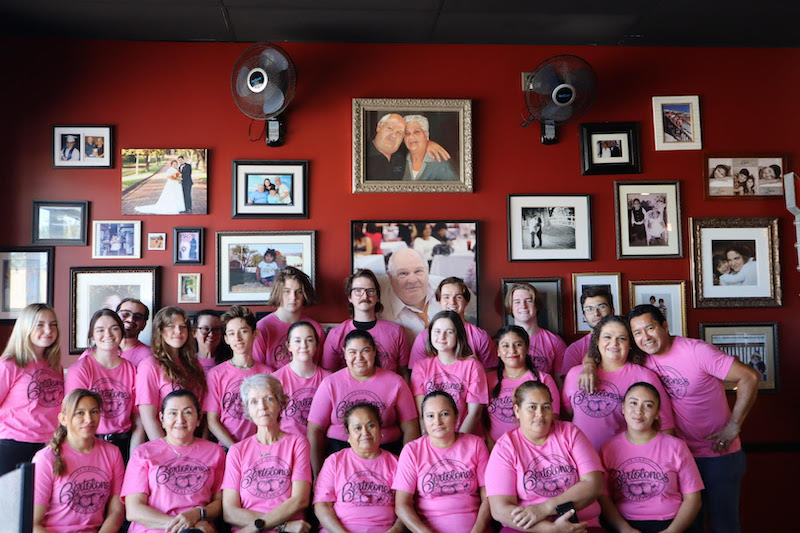 “It’s something that is very near and dear to my heart, you know, breast cancer eventually affects all of us either directly or indirectly,” Sonia Bertolone, owner of Bertolone’s, said.

Bertolone’s famous fresh strawberry cake is its most popular type, and for every slice sold in October, the restaurant will donate $1 to BCRFA.

Pink paper ribbons will also be for sale. Customers can purchase them for $1, $3 or $5. All proceeds will go to BCRFA.

Purchasers of the ribbons can decide what they want to be written on it, and it will be displayed in the restaurant’s front window.

Bertolone’s goal is to reach $5,000 in donations by the end of the month. There will be a gauge chart set up to keep progress of the restaurant’s total donation amount.

Kate Kiefer, a BCRFA board member, reached out to Bertolone to see if she would be interested in being a sponsor of Calera Goes Pink.

Calera Goes Pink is a series of events held to raise money for BCRFA throughout the month of October. They partnered with BCRFA 11 years ago. Over the past ten years, Calera Goes Pink has raised $416,000 for BCRFA.

BCFRA has raised $11 million in total over its 25 years.

Money raised by BCFRA is put into grants that support breast cancer research throughout Alabama.

In addition to being a sponsor for Calera Goes Pink’s disc golf event, Bertolone also took the cause to her restaurant.

“Sonia’s gone above and beyond even the financial donation that they made,” Kiefer said. “People like Sonia need to be recognized.”

Additional donations can be made through Bertolone’s personal and business Instagram fundraiser, @bertolonesclassicitalian.

The fundraiser starts Friday, Oct.1 and ends on Saturday, Oct. 31.