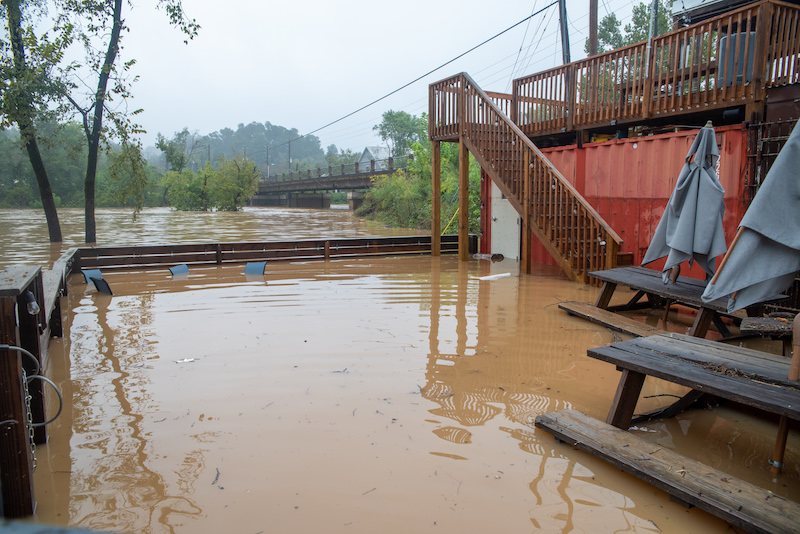 The storm that hit most of Central Alabama Wednesday night caused severe property damage and took the lives of some Shelby County residents. Pictured is the back patio of Over Soul Brewing in Helena underwater. (Reporter Photo/Keith McCoy)

United Way of Central Alabama has announced it will be launching financial efforts to help those who were impacted by the massive storm on Wednesday night, Oct. 6. The storm caused severe damage to areas throughout Central Alabama, resulting in rolling blackouts, severe injuries and even deaths.

“Here at UWCA, our sincere condolences go out to those impacted by this unprecedented disaster. It is in times of need that we discover the full impact of what it means to LIVE UNITED,” United Way wrote in a prepared statement.

The storm raged for several hours into the night, and during that time emergency dispatchers throughout Central Alabama counties were inundated with calls. It was reported the city of  Pelham took 282 calls for service during the emergency situation, while 82 rescues occurred from homes and 15-20 were rescued from vehicles.

“UWCA is ready to help the victims of this disaster with their urgent needs,” UWCA’s statement read. “Individuals and families seeking support options can call 2-1-1, UWCA’s information and referral line, to be linked to the proper resources.”

All proceeds donated will go towards helping individuals and families affected by the flood, and any extra contributions will go towards future disaster relief funds, according to UWCA. UWCA is also organizing volunteer aid with area clean- up and other immediate needs.