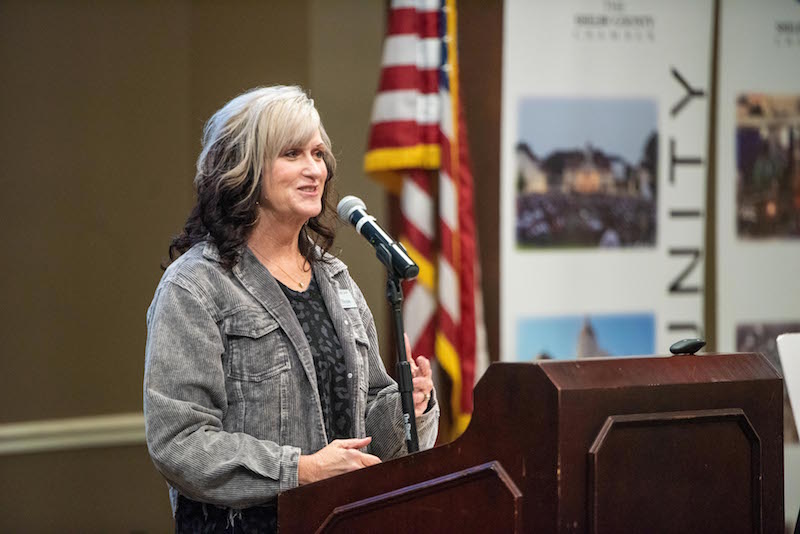 Dotti Bailey started working at SafeHouse in 2013 as a program director and became the executive director in 2017. (Reporter Photo/Keith McCoy)

Bailey started working at SafeHouse in 2013; however, she had applied to be a case manager at SafeHouse a few years before and did not get the job.

“She told me that she thought I was overqualified for the position and that she would hang on to my resume,” Bailey said. “I thought, ‘Oh yeah, right,’ you know? I remember calling my husband and I was crying and I was like, ‘Oh my gosh, I know SafeHouse is where I’m supposed to be.’”

After not getting the job, Bailey went back to school to get her master’s degree in social work at The University of Alabama. In May 2013, two weeks before graduating, she received a phone call.

The previous program director at SafeHouse, Wanda Bowden, was leaving and kept Bailey’s resume. She said they needed Bailey to fill the position. So, right after graduating, she started with the organization.

Bailey was the program director at SafeHouse until 2017, when the previous executive director left and Bailey saw an opportunity.

“I felt that I had the experience because I had worked in almost every role within the organization,” Bailey said. “And those that I hadn’t served in, I had certainly learned a lot about in the last couple of years.”

Bailey said she learned a lot during her time as executive director at SafeHouse, and explained that a lot of what they were able to accomplish was because of other’s work before her.

“I had some great people who forged a path before me and so much support and help,” Bailey said. “We at SafeHouse were able to accomplish a lot of things during that time, including celebrating our 30-year anniversary in 2019. We had a gala with three survivors who spoke. It was just a really great opportunity to focus on the community and the impact of domestic violence in the community. That same year, SafeHouse was awarded Shelby County’s Nonprofit of the Year.”

During her time as executive director, SafeHouse was able to start the Safe Havens Supervised Visitation and Safe Exchange program, which is specifically for families impacted by domestic violence. It is a safe way for parents to exchange children for visitation but not have to come into contact with one another.

Additionally, SafeShelby, a sexual assault services program that provides 24/7 services for survivors of sexual assault, was launched in 2016, and the domestic violence court in Shelby County was also opened in 2017.

However, Bailey said that she is most proud of SafeHouse’s ability to adapt to COVID-19 and be able to remain 100% operational throughout the pandemic.

“To me, it’s just a true testament to our team, our staff, our volunteers, our supporters, everybody that just really helped,” Bailey said. “It was just such a tough time. Operating a 56-bed residential facility… when at the beginning nobody knew really anything.”

Bailey said closing during the start of the pandemic was not an option, so they had to make it work.

“What many other people learned is what we already knew, which is that not everybody is safe at home,” Bailey said. “So, a lot of those stay-at-home orders and things like that really contributed to higher domestic violence incidents and more severe injuries.”

When it came to her decision to step down as executive director, it wasn’t as simple as she thought it would be.

“Much like my journey with SafeHouse, if you would have asked me back then would I be the executive director, I would’ve been like, ‘No,’” Bailey said. “It’s an evolving thing. Really, what happened was I started writing grants and I saw a lack of information out there on domestic violence.”

Bailey understood why there was a lack of research as it is a tough population to be able to collect data.

As she saw a need for improved research, she decided to go back to school and get her doctorate and planned for her focus to be domestic violence. However, when Bailey started the doctorate program, her focus shifted to children.

“I would have never ever imagined that,” Bailey said. “I started focusing on child trauma. As we all know there’s a lack of resources available, lack of providers, especially those that are specialized in trauma and developmental trauma. The waiting list, the insurance, there are just so many things. So, I just made the decision, probably in 2019, that at some point, that is what I was going to do.”

The COVID-19 pandemic helped Bailey realize that leaving would never be an easy thing.

“I just realized, there wasn’t ever going to be a perfect time,” Bailey said.

Despite not being the executive director, Bailey still plans to work alongside SafeHouse.

She will be opening a private practice in Pelham called the Bailey Wellness Group, which will provide counseling and therapy services to children who have experienced trauma, such as those who have been exposed to domestic violence or have suffered abuse and neglect.

“Domestic violence has always kind of hidden in the shadows for a long time, and we’ve kind of brought it to the forefront and recognized it as a community issue,” Bailey said. “So it’s an issue that we all need to be working toward. I feel like this is just my way of doing that in a different capacity.”

In addition to partnering with SafeHouse, Bailey’s private practice will accept insurance and have a sliding scale.

“I know that’s one of the barriers to receiving services, so I’m hoping that maybe we can bridge that gap some,” Bailey said.

Bailey said her time at SafeHouse was full of people who she wishes she could mention or thank.

“The most humbling part is to think about the people that I’ve been able to interact with throughout the years, and first and foremost I think about the victims and survivors,” Bailey said. “They are the ones that show the courage and the bravery and the hope. They’re the ones that do that hard stuff. There’s been times when I’ve thought there’s no way I can do this, and then I’ve just thought of someone and what they’ve overcome, and I’m like, ‘Ok we can do this.’”

“In the middle of whenever I was in the doctorate program, my husband and I had our grandchildren placed with us,” Bailey said. “So I was executive director at SafeHouse full-time, caring for toddlers full-time and getting my doctorate. So, my husband deserves huge accolades because he helped so much.

“It was a group effort, everything at SafeHouse, everything. I’ve done nothing for my own, so to speak, it’s been a team effort. There’s so many people to thank.”