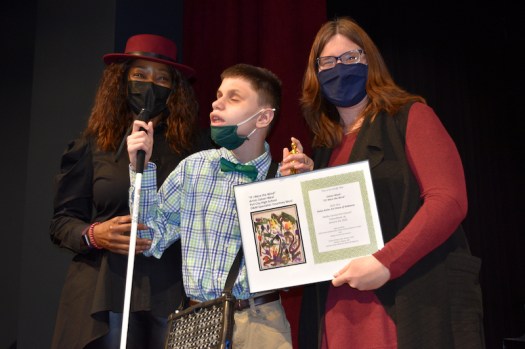 Zahari Weal (pictured above) arrived in America from an orphanage in Bulgaria in 2014 when he was 8 years old. He is nonverbal and has Retinopathy of Prematurity stage 5 with no light perception. Ninety-five percent of his piece was completed by Weal. He had some help with applying the items with hot glue. (Special to the Reporter/Sandra Annonio) 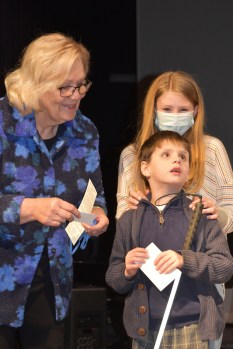 Sawyer Clyde is an energetic 6-year-old who loves to read, play outside and talk to Siri. He was very creative when he worked on his painting/artwork. He wanted to make a tractor and made sure that he didn’t miss any detail right down to the blinker, light switch, gear shifter, clutch, gas, and brake pedals. He was very particular on what colors he used for the background. The only help he had was gluing the items on. (Special to the Reporter/Sandra Annonio) 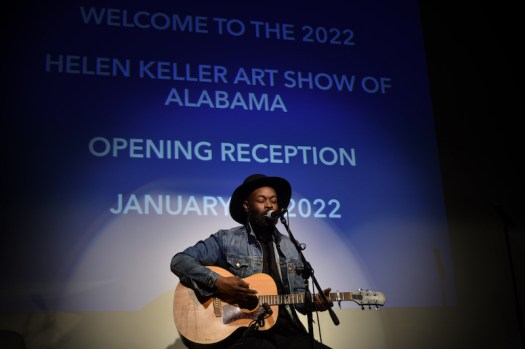 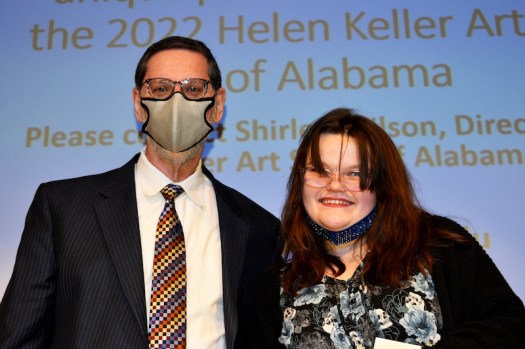 Avalee Williams is a ninth grader at Gardendale High School. Avalee has been a patient at the Callahan Eye Hospital since she was 9 months old. She has optic nerve hypoplasia and can only see out of one eye. Her art creation is an old antique mirror that when you look into it, you see yourself as a masterpiece-one of God’s finest creations. She used an antique mirror, clay, mod podge, wood cutouts, chalkboard paint and a chalk paint pen. She also used a sharpie and a dotting tool. Avalee used hot glue with different techniques to give the art dimension so people that can't see can feel the texture of the mirror. (Special to the Reporter/Sandra Annonio)

COLUMBIANA – On Sunday, Jan. 23, the Helen Keller Art Show of Alabama held its opening reception at the Shelby County Arts Council. The show will stay at SCAC until Thursday, Feb. 24 and then will travel around the state to preview in different museums.

The Helen Keller Art Show is an annual juried art show that has been held for more than 20 years. Submissions are open to students who have visual impairments, blindness or deaf blindness from around the state in public, private and home schools. The show is part of the UAB School of Optometry and the UAB Vision Science Research Center’s outreach module.

“The show does emphasize the students’ abilities, their creativity and their talents,” said Shirley Wilson, director of the Helen Keller Art Show of Alabama. “It allows the students an opportunity to showcase the special gifts that they have.

“It does then allow the public an opportunity to gain a better understanding of the children’s skills and talents. It’s really promoting awareness.”

The opening night of the art show had over 100 people in attendance, which surprised Wilson.

“We were really, really surprised at the number of people that actually showed up because we were just going to stream (it), and we turned around and it was just full,” Wilson said.

Normally they always have a good attendance for the opening reception, but for an opening during the pandemic, Wilson was pleased with the turnout.

“Our opening reception is like the Oscars for our kids,” Wilson said.

She said that before the pandemic they would have a red carpet for the kids who had art in the show to walk down in their nicest red carpet clothes. They would receive a statue or metal, a copy of their artwork and a certificate with their name on it.

However, due to COVID-19 and funding, they had to scale back the celebrations.

This year, there were 46 pieces of art in the show, which is unusual.

Wilson said usually, they have to narrow down the number of submissions they can actually feature in the art show because of the cost of framing each piece.

“Most of the time the art would come in on a piece of paper or whatever they work on,” Wilson said. “And then, Thompson’s Framing in Vestavia does all the framing for us. So we kind of limit it because we don’t really have a budget of funds; we don’t have any grants or anything like that. We take donations for the art and that’s where we get the funds to frame the artwork and the other expenses of the show.”

However, this year the sponsors created the opportunity for every piece of art the Helen Keller Art Show of Alabama received to be put into the show.

One of the students created a piece based on a school unit about different places. The teacher was letting her listen to the sounds of New York City, which inspired her piece.

“So she did her artwork and then she put it in braille,” Wilson said. “So, we did translate it. For the person standing there, it’s translated of what she was actually hearing if she was in New York.”

Despite not being able to give the artists the full red carpet treatment, Wilson said she hopes to bring the kids on more summer trips, which they started doing before the pandemic.

“We tried to start doing something in the summer with the kids, with the artists, their parents and the teachers,” Wilson said. “So we are looking to have workshops for them.”

Before the pandemic, Sloss Furnace did a workshop in collaboration with UAB School of Optometry and the UAB Vision Science Research to help better understand visual impairments.

The trip was beneficial to Sloss Furnace, as the students pointed out how parts of the furnace were inaccessible because of the rocky pathways.

“So our students were like, ‘We can’t walk through this, our canes keep getting stuck in the rocks,” and they were able to get some of their sponsors to pave all the way through Sloss Furnace,” Wilson said.

The call for art for the 2023 Helen Keller Art Show of Alabama will go out in September as schools open, and the deadline for submissions will be at the end of November.

For any questions, email Sjwilson@uab.edu.

The Helen Keller Art Show of Alabama is a traveling show. The schedule is as follows:
• Jan. 23-Feb. 24 at the Shelby County Arts Council in Columbiana.
• March 3-March 15 at the Heritage Hall Museum in Talladega.
• April 1-May 21 at the Wiregrass Museum of Art in Dothan.
• May 24-June 28 at the Tennessee Valley Museum in Tuscumbia.
• July 16-Sept. 14 at the Alabama Center for the Arts in Decatur.
• Sept. 16-Sept. 25 To be decided.
• Oct. 4-Oct. 28 at the Comer Museum & Arts Center in Sylacauga.
• Nov. 1-Jan. 4 at the University of South Alabama Marx Library in Mobile.