The business of COVID 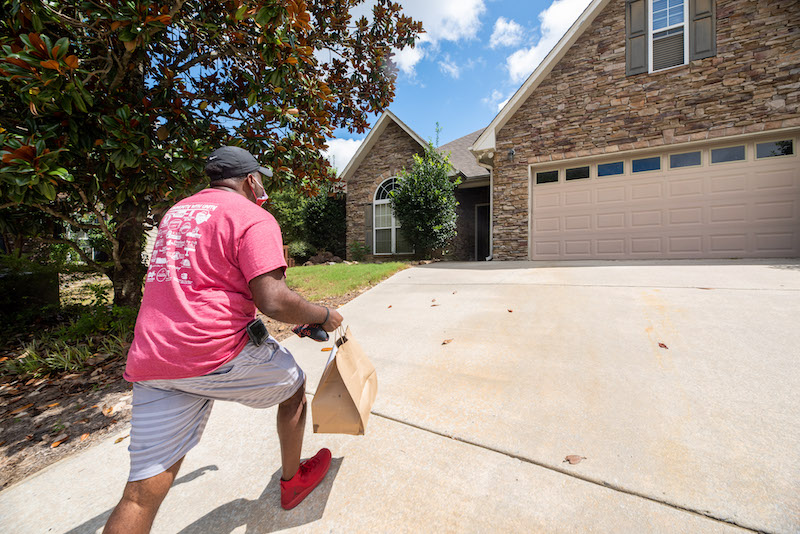 Over the last two years, businesses have had to pivot and adjust to a landslide of new and hard-to-navigate issues. Many business owners had to make tough decisions, from temporarily closing, changing business models, handling supply chain issues and more.

A Federal Reserve study estimated 200,000 establishments closed during the first year of the pandemic, a rate around one-quarter to one-third above what is considered normal. Additionally, the Statista Research Department conducted a January 2022 survey showing 22.1 percent of businesses claimed that the COVID-19 pandemic had a large negative effect on business and 44.1 percent said it had a moderate negative effect.

As COVID-19 cases begin to decrease and people return back to pre-pandemic lifestyles, businesses begin to return to a sense of normalcy, while still being realistic about arising issues and the future.

Nedra Moore opened Creations Galore and Moore in Calera early in October 2020. Moore said that she has seen an increase in business in 2022, which has led her to have a more positive outlook for the future.

Contrasting to previous issues that the business had to deal with, such as roadside pickup and delivery, Moore instead has to consider the fact that more people visiting her store means more space is needed.

“Now people are wanting to have somewhere to sit on the inside,” Moore said. “Currently we only have outdoor seating.”

One factor that has helped support Moore through the pandemic has been the merchant community in Calera. Other business owners in the area do their best to lend support to each other.

“One merchant during certain seasons may get an influx of traffic where that may decrease for another business,” Moore said. “So, we try to help promote one another. We’ll run specials together. Just try to make sure each business here survives.”

The business is still not fully past some of the hurdles brought on by the pandemic, however.
Moore is still navigating supply chain issues and is finding ways to work around them such as purchasing different brands or ordering items in advance because of delayed shipping times.

Businesses that frequently hosted large groups of people that were hurt by social distancing, such as the Pelham Civic Complex, have also seen people return to their establishments for larger-scale events.

“I know last season for the bulls we had limited capacity of 60-70 percent (that) was the maximum that they would sell tickets,” said Stephen St. John, executive director of the Pelham Civic Complex. “Now coming out of the pandemic we have seen at least three sellout games. Our public events, our ticketed events, our public skating are all being heavily attended, and I do believe a lot of that has to do with the fact that folks were at home for so long. I think that they just look for things to get out of the house to do.”

Additionally, the complex is beginning to hold events and meetings, such as weddings and banquets, again. Although meetings have not bounced back to where they were pre-pandemic, John said the complex has started to see a regular stream of bookings for large events.

“Another good barometer is the return of high school graduations,” John said.

Pelham High School uses the facility as its graduation venue. In May 2021 PHS held its reception around half the normal capacity of the complex. John suspects that they will have a full house of 4,000 people for this year’s reception, provided nothing new comes along.

The Pelham Civic Complex has maintained some of the routines it created during the pandemic, as they were good practices.

“Your daily sanitizing and things like that that have actually become good habits for us to use all the time. It raised the game in what we’re presenting to the public as far as cleanliness,” said John. “That’s something that will never go away.”

As it comes out on the other side of the pandemic, John said the Pelham Civic Complex still experiences problems that many other businesses are having to handle, such as a shortage of labor.

Often referred to as the Great Resignation, a vast number of Americans have voluntarily left their jobs in the wake of the pandemic. According to a JOLTS report, a record number of 4.53 million Americans quit their jobs in November 2021. Frontline workers, especially those that work in retail, hospitality and health care, have particularly high quit rates. This has caused employers to struggle to fill open job positions, especially in lower-paying jobs.

The Pelham Civic Center increased minimum wage, which John said is a cost of doing business.

“Having enough staff to hold a sellout hockey game is challenging,” John said. “One thing I would say is the staff here has been fantastic and doing what they can do, doing things outside of their regular job description. I feel like the staff we have assembled here at the civic complex has gone above and beyond.”

John said they have also shifted to a volunteer workforce. The complex’s figure skating and youth hockey public as well as clubs and teams outside of the building have volunteered their effort. For their help, the Pelham Civic Complex donates proceeds from their events to the groups volunteering.

Ultimately, John said things are going well for the Pelham Civic Complex. Hockey games are surpassing pre-COVID crowds and public sessions are back to the same turnout they saw in 2019.

“It would be interesting to see if it maintains. Because you take a year and a half out of your business model and it’s hard to compare the rebound,” John said. “Does it substantiate itself? Is it going to be a long-term gain or is it just people running for the door because they can get out of the house?”

Despite the uncertainty, John said the outlook for the complex’s future is “very, very bright. We have some remodeling scheduled for this summer and then some continued projects as well into 2023. So, not only do I think the business space is there as far as customers, I believe the experience is getting a whole lot better and the building will be a lot more attractive.”

Maurice Mercer started KAT’s Delivery, a food delivery business, in 2014, and since then he has had to face countless hardships and situations that he never would have considered.

Prior to COVID Mercer was doing what most businesses were doing, moving steadily. Hiring, working on sales and marketing and competing with larger brands. KATs Delivery had just expanded into a new area, Talladega, three weeks before everything went on lockdown and students were sent home.

Talladega has a large student population with the Alabama Institute for the Deaf and Blind and Talladega College both being in the county. So, while KATs Delivery attempted to stay open in the area, the loss of the student base hindered that plan.

“Contrastly in places like Shelby County and Pike County where Troy University is, we really didn’t see that type of interruption because the towns didn’t necessarily close,” Mercer said. “So we actually grew. About the time April 1 rolled around and for the next few months as restaurants were switching to curbside, we excelled in that time frame.”

Mercer believes that the popularity that food delivery gained during the pandemic has cemented its place in the post-COVID cultural zeitgeist. However, whether the customer’s KATs Delivery gained are long-term is a different question.

“I think it depends,” Mercer said about whether he believes customers will stick around. “We’ve had some customers that are definitely long term. But different people view delivery differently.”

Mercer explained that some KATs Delivery customers order delivery once a year or sporadically every couple of months. Others might order multiple times a day.

“We did gain new customers during that period. Some of them still utilize the service today. Others who may feel safer going back into the restaurant have chosen that option. We’re still servicing more customers than we did before the pandemic, but we’re not servicing as many as we were during the pandemic number-wise.”

With all the adjustments that COVID called for, KATs Delivery did implement technology changes that have had a positive outcome for the business.

Before, Mercer would interview everyone face to face, but with social distancing and closed meeting spaces, he shifted to virtual meetings which have saved him time in the long run.

“Prior, I may show up, get ready for interviews, maybe we schedule five and three show up. Well now since its virtual, if only three show up I’ve actually gained the time because I only have to watch three interviews,” said Mercer.

The business also shifted to DocuSign to house reports and documents online.

“It just really pushed us to go more digital than we had ever been in the past,” Mercer said.

Despite some of the more optimistic aspects that Mercer mentioned, the ambiguity of what the future holds and some of the current issues KATs Delivery faces are not something he can ignore.

With the increased food cost because of supply chain issues within restaurants and the rising cost of gas due to the Russo-Ukrainian War, KATs Delivery is in a precarious situation.

“Do we put that cost on the customer who is already seeing increased food cost because the restaurants have raised their costs,” Mercer said. “So, right now our service it goes from that convenience to luxury. I think we’ve always been convenience but now, with inflation and everything, we’re on this brink of luxury. And I don’t know if we can survive solely being a luxury brand.”

Mercer explained that everything the business has to face builds up, it is only so long before something comes along that is the straw breaks the camel’s back.

“My outlook is weary if certain things don’t change with the supply chain as well as gas,” Mercer said.

Regardless of everything, Mercer is full of appreciation towards his customers, drivers, local restaurants and support.

“If were to lose a certain segment of our customer base just because they could no longer afford it is what worries me,” Mercer said. “So we appreciate the ones who have been with us before the pandemic, through the pandemic and after. And hopefully, things will change here on the global scale this will allow us to continue to operate and compete for business.”

Where do we go from here?

Businesses still face a large number of issues and owners do everything they can to survive.

Dr. Aimee Mellon, an associate professor of marketing in the Stephens College of Business at the University of Montevallo presented the 2022 Business Outlook Survey to The Shelby County Chamber investors in January.

Mellon said that the biggest problem for many of the businesses, particularly small businesses is the lack of employees, which could be because of healthcare issues or a disconnect on what some of the businesses feel the upcoming workforce wants versus what they actually want, especially regarding the quality of life and work-life balance.

The Great Resignation feeds into the supply chain issues as well.

“The supply chain is also a part in the workforce flow, people are a part of the supply,” Mellon said.

Mellon suggested that businesses be more forthright with what they need from the community.

“You hear a lot of individuals talking about how they want to support small businesses but they don’t realize many of them are an operation on a short-term budget,” she said.

She said a key to small businesses making it through the supply chain issues could be coopetition, the collaboration between business competitors in the hope of mutually benefitting one another.

“Each business that is attempting to survive and manage on its own should be set aside and help each other,” Mellon said. “Everything is moving at a pace faster than we are able to adjust, and everyone is doing the best they can, but we shouldn’t be looking at doing it on our own but coming together as a community to address it.”