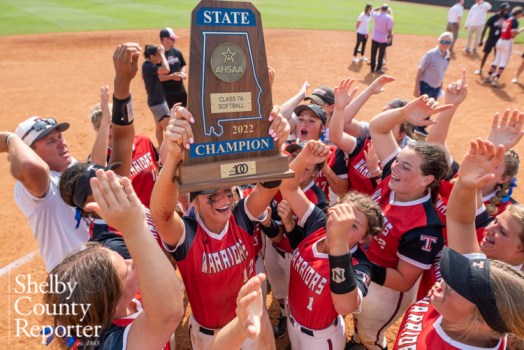 The Thompson softball team hoists the Blue Map trophy in the air after winning the 2022 Class 7A State Championship with a 2-0 shutout of Hewitt-Trussville. It marks the third championship in school history for the Warriors. (Reporter photo/Keith McCoy) 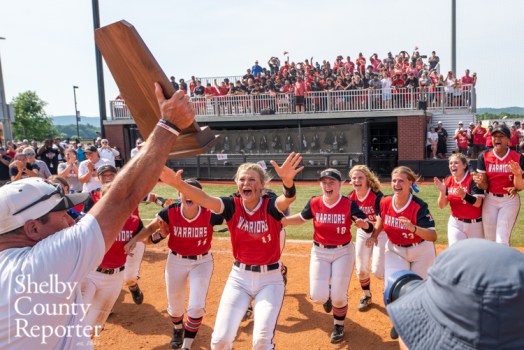 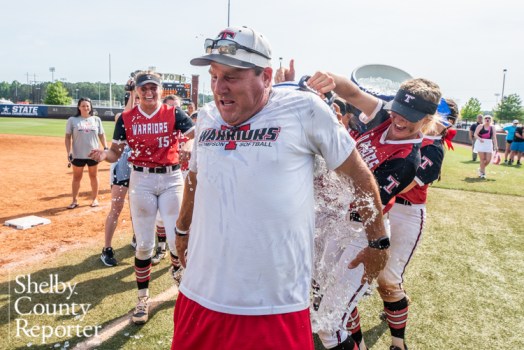 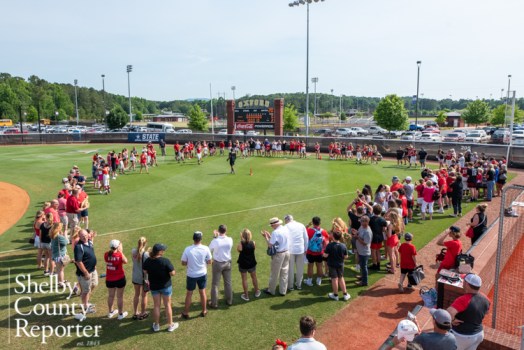 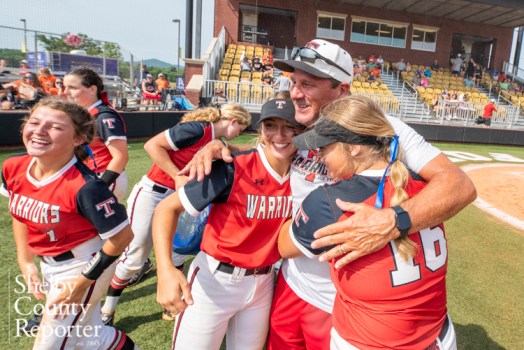 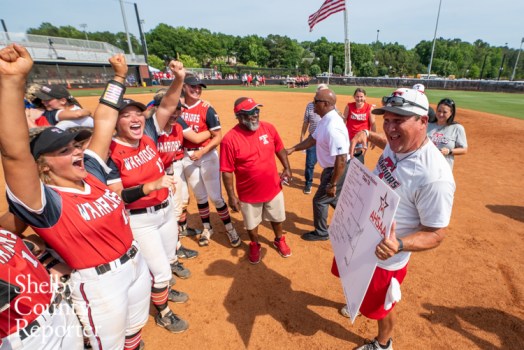 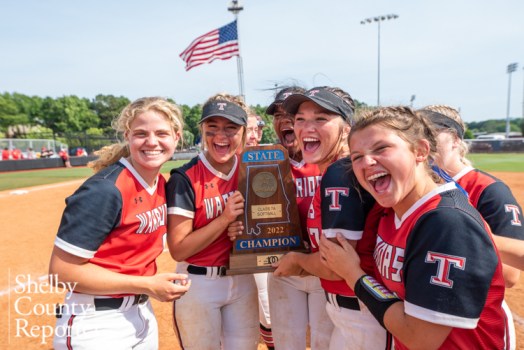 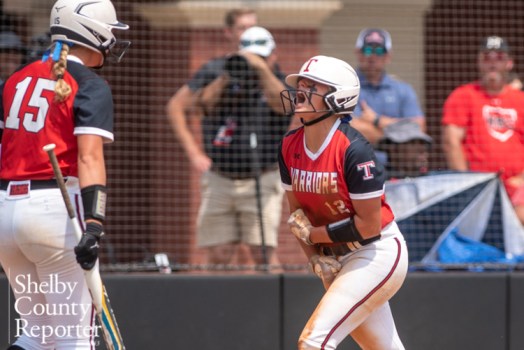 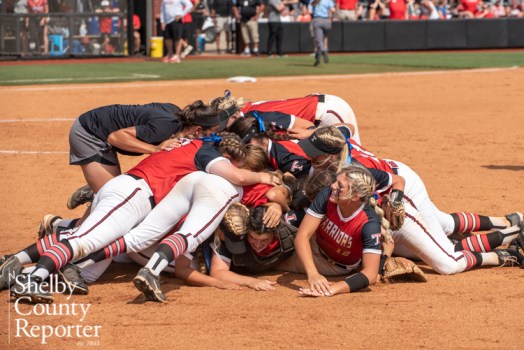 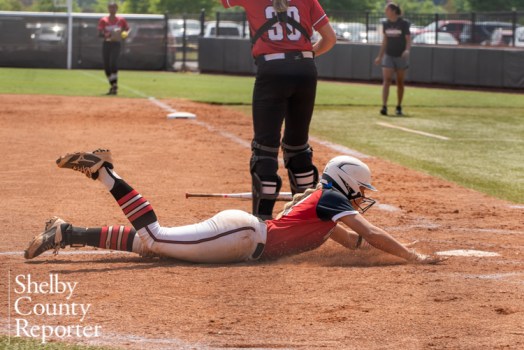 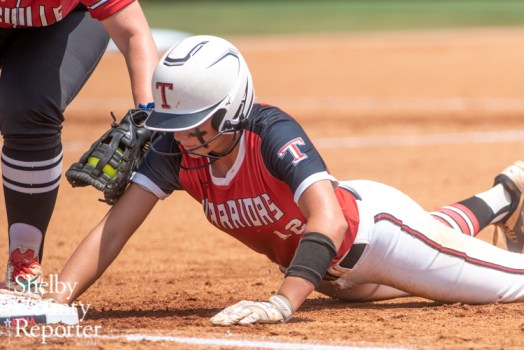 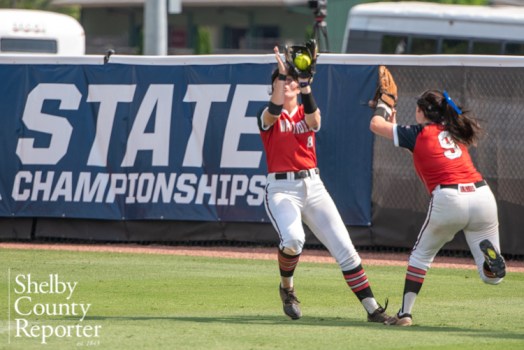 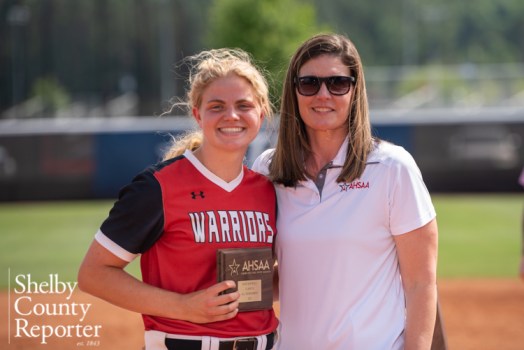 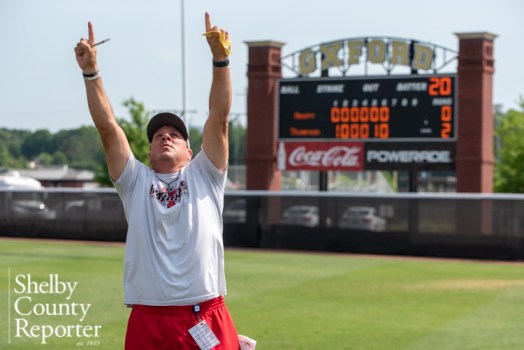 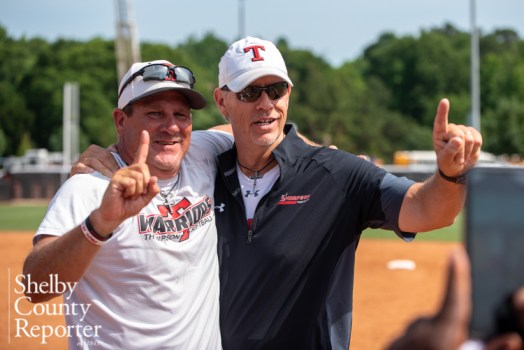 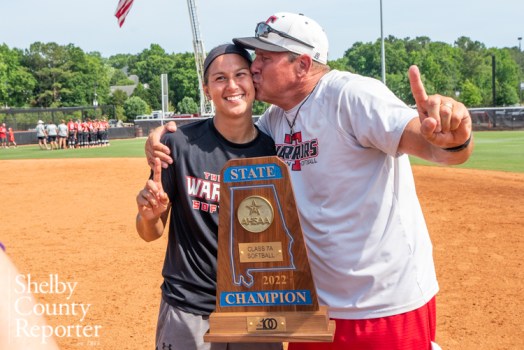 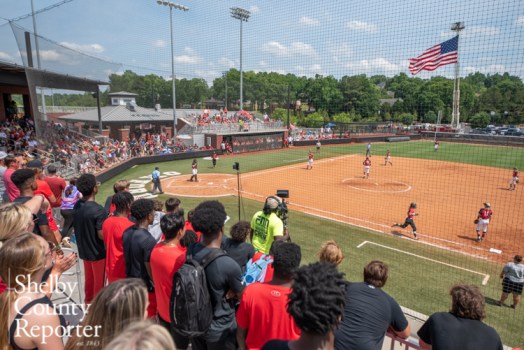 OXFORD – Lying at the bottom of a dog pile, Chalea Clemmons could barely breathe, but she didn’t care.

The star Thompson pitcher had just pitched the game of her life in the Class 7A State Championship game by shutting out two-time defending state champion Hewitt-Trussville to help the Warriors claim their third title in school history and first since going back-to-back in 1998 and 1999.

Taking down the Huskies 2-0 in the championship game completed a redemption path known as Mission 81 for the Thompson Warriors, as they set a goal of winning the championship after last year’s early exit at the state tournament.

“Oh, that’s all we talked about. Last year, I’ll be honest with you, we were happy to get here,” head coach Kevin Todd said. “As a coach, we thought Hewitt was the team to beat last year, and that turned out to be true. I didn’t know if we could compete with them last year because we were young, but after we lost out, our next meeting we had, we set our goals.”

That goal was to come back and win the championship, and on Thursday, May 19, at Oxford’s Choccolocco Park, they completed that goal.

This time around, entering the game, they knew it was their time.

“When we met in the locker room before we got on the bus to come down here, it was a different story this year,” Todd said. “It was, ‘We’re going to win it.’”

The Warriors scored one run in the bottom of the first inning on an RBI single from Jenna Williams. After Dailynn Motes walked to start the inning and Laney Williams walked two batters later, Williams hit a hard-bouncing grounder up the middle that was deflected off a glove and allowed Motes to round third and score for the 1-0 advantage.

That’s all the cushion Clemmons needed.

In a pressure-packed situation, she kept getting through innings with the help of the defense behind her.

The Huskies were hitting some hard balls, but Thompson’s defense was there every step of the way, including big catches from Kendall Channell at catcher and Motes at shortstop in the top of the second.

From there, Clemmons knew she was in good shape with them behind her.

“They were amazing,” she said of the defense. “I could not have done it without them. They were on fire today. We were killing it today. We came ready to play.”

Todd added that the defense has been their recipe for success all season.

“It was great, and for the most part, it’s been great all year,” he said. “That’s what we preach. We have to win with defense and pitching, and today, we got both against a very good team in a two-time state champion that we have all of the respect in the world for.”

Still in search of an insurance run to increase their confidence, the Warriors got it in the bottom of the fifth.

Motes again got on to lead off the inning thanks to a double. Then, Olivia Tindell laid down a bunt to move her over, but no one covered first, which led to the ball getting away and Motes scoring Thompson’s second run.

Now six outs from the championship, that was more than enough, as Clemmons didn’t allow a baserunner, putting Hewitt down in order the final two innings.

“It was crazy,” she said of the final out. “I was like, ‘You know, we’re up 2-0 with two outs, this is about to be the best pitch I throw.’ It probably wasn’t my best because she hit it, but we had the outfield backing us up and… we just won state!”

Senior leader Ella Pate didn’t have a hit in the game, but made several big defensive plays and was key a day earlier in a comeback win against Hewitt that the Warriors won in eight innings to get the upper hand on the final day of the tournament.

“I’m shocked. I literally have no words,” she said. “I didn’t have any words yesterday when we beat them. My emotion finally came through this game. We deserved it more than any other team here.”

It also marked a special moment for Todd as the head coach, as his dad was in attendance.

With his dad battling cancer at 83 years old, Todd came into the day wanting to win a championship with his dad in attendance.

“It’s special,” the head coach said. “Not a lot of people know, but he’s sick right now and going through some hard time with cancer treatments. He won’t miss a game. He doesn’t want to miss a game, so that was a special, really special moment, that I got to experience my first state championship with him here.”

Before the team went to grab their blue map trophy, Todd spent a special moment with his dad, and whispered to him, “How ‘bout that?”

With the win, Thompson ended up finishing the season as the only team to shut out Hoover, and they did it twice, finishing with the shutout effort to claim the team’s third title in school history.