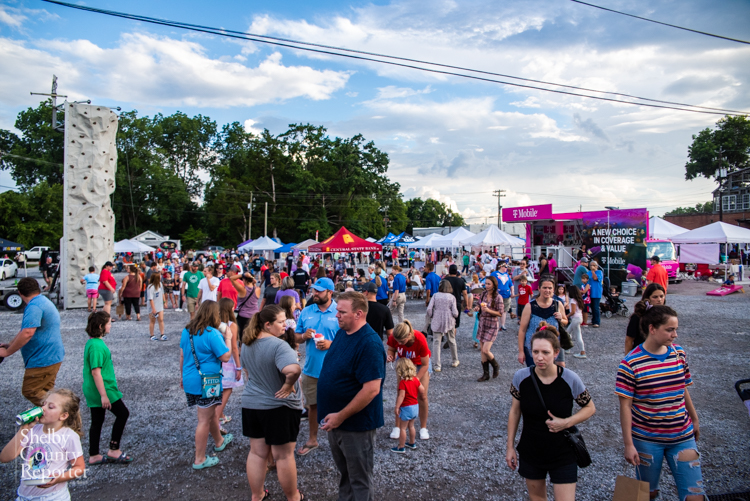 Calera’s First Friday 2022 season will wrap-up with a back to school themed festival on Aug. 5. (File)

CALERA – Calera Main Street might have just had its July First Friday festival, but it is already gearing up for its next in August.

“There’s one more First Friday in this series on Friday, Aug. 5, and we are looking forward to that because it’s going to be all about back to school,” said Calera Main Street Executive Director Jackie Batson.

Central State Bank, the presenting sponsor of this festival, will give away 100 backpacks full of supplies to children the night of the festival with no questions asked. Central State Bank will be collecting school supplies at all of its Calera branches and at Main Street merchant storefronts such as Cowart Drugs and The Garage Kickboxing through the end of July.

“We are teaming up with all of Calera to gather school supplies for the upcoming school year, and we need your help to fill over 100 backpacks,” said Jordan Bradley, Central State Bank marketing director.

This is the second year that Calera Main Street has featured the backpack giveaway.

“Last year Calera’s churches and volunteers came together to stuff 100 backpacks and gave them away at the festival,” Batson said. “Dozens of children were excited to receive much-needed supplies with no questions asked. Many of the backpacks as well as boxes full of needed classroom items were divided and taken directly to all four Calera schools to be used as needed.”

Following last year’s tradition, donations for classrooms will also be collected the night of the festival if anyone would like to bring supplies.

Central State Bank will put on a youth talent show during the festival. Children are encouraged to share their special talent, passion or skill on stage. Performances may consist of singing, dancing, comedy, spoken word, magic and more. The talent show is open to ages 5-18, and performances will be subject to approval. Those interested in featuring in the show can sign up at Forms.office.com/r/u84V7unmXT.

Additionally, the Calera High School Football Boosters will hold “Meet the Eagles” in conjunction with August’s First Friday. The entire Calera High School band, youth and recreational cheerleaders and all the football players from the high school and middle school teams will have a pep rally-style celebration.

“Community involvement and support are very important to the success of Calera Athletics,” said Richard Colmer with the Calera High School Booster Club. “The Calera Fall Athletic programs are honored to be included in such a special community event as First Friday. We look forward to seeing everyone this season under the lights at Ricky M. Cairns Football Stadium.”

A Meet the Principals tent featuring all four Calera school principals will be at the festival so attendees can meet them and ask any questions they might have.

“This will undoubtedly be the biggest August family event in Calera and will kick off the school year with something for everyone,” Batson said. “We can’t wait to see the talent on display for this event, from music to athletics and various performances we’re sure to be entertained.”