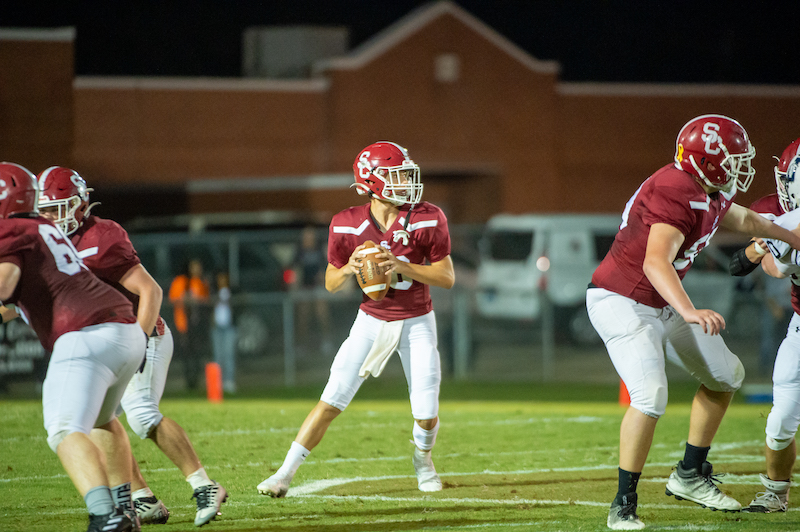 The Shelby County Wildcats will host No. 5 Moody in a big matchup this Friday in Columbiana. The Blue Devils are led by former Chelsea star and Thompson assistant Jake Ganus in his first year as head coach, while the Wildcats, led by Zeb Ellison, are 3-1 overall and coming off a bye week. (For the Reporter/Larry Dancy)

We have officially hit the midway point of the 2022 high school football season this week, which means a break from region play. That, however, doesn’t mean we’ll see a lack of exciting games this week.

Not only do we have a battle of defending state champs, read more on that game here, but we have two county battles, teams looking for crucial confidence-boosting wins heading into the second leg of region play and several other interesting storylines.

It will be an important week for teams to fine tune any last adjustments before the final battle for playoff spots and region titles begins next week.

For a non-region game, this 280-area rivalry will be important for both of these teams who need a jolt of confidence after heartbreak their last time on the field. Two weeks ago, Briarwood fell 35-34 to Pelham after taking a 34-14 lead into the final quarter, while Oak Mountain led Tuscaloosa County throughout a week ago before ultimately falling 34-31 on the final play. Now, the Lions are 2-2 (1-1) and Oak Mountain is 2-3 (0-3). With big region games still looming, a win in this one could quickly build confidence moving ahead. Right now, however, Oak Mountain’s defense has taken a step back, which may be the difference in this one. Briarwood’s defense has also struggled this season and isn’t what we’re used to seeing, but the Lions have started to show what their offense is capable of with Christopher Vizzina leading the way and receivers starting to step up. Whichever team can get into the 30s will win this one, and right now, we’ve seen a little bit more consistency from Briarwood. Oak Mountain 21, Briarwood 31

Similar to the game we just talked about, this one is a big non-region county battle of teams who have grown throughout the season but enter off difficult losses. Chelsea fell 48-3 to Thompson in a game that started promising, while Pelham fell 31-24 in overtime to Helena. Pelham is now 1-3 overall and 1-1 in region play, while Chelsea is 1-4 overall and 1-2 in region play. Judging off what we have seen, both entered the season with solid defenses, but it has been the offenses that have shown the most growth for each. The Hornets are led by sophomore quarterback Carter Dotson and running back Emerson Russell, while Pelham is highlighted by Clayton Mains and Darius Copeland. Pelham, however, has shown a little more balance and is slightly more dynamic, which is about the only difference in this one. Expect a tightly-contested battle between these two county rivals. Chelsea 17, Pelham 24

It’s homecoming week for Helena, and the story of the week will be focus. If the Huskies are focused on this game rather than the festivities that came along with homecoming, they’ll be fine. That’s easier said than done because they’re still student athletes deserving of fun, but finding that balance will be key. The biggest benefit for Helena going into this game will be the defense. The Huskies have given up 19.8 points per game and have given up 28 or less in every game this season. Now, they get a Jackson-Olin team that has scored 25 or less in every game, 14 or less in four of five and has been shutout in two straight. Helena’s offense has also started to show a bit more balance with Dalton Lewellyn stepping up at quarterback, Hunter Hale stepping up at receiver and AJ Horstead fresh off a close to 200-yard game with Jordan Washington out of action. I think everything is coming together for the 4-1 Huskies, and that should be a big benefit this week. Helena 24, Jackson-Olin 14

Fresh off a bye week, Shelby County will welcome former county great Jake Ganus and his No. 5 Moody Blue Devils to Columbiana this week. In his first year leading the Blue Devils after several years as an assistant at Thompson, Ganus has led Moody to one of their best starts in school history at 5-0. Shelby County, however, continues to show promise under head coach Zeb Ellison and is entering this matchup 3-1 with an extra week of preparation. It will be a tall task, but Shelby County’s defense has been stellar most of the season, giving up seven or less in three of four games and giving up an average of 13.3 points per game. This Moody offense will by far be the most difficult the Wildcats have faced, however. That combined with some offensive struggles likely makes the difference this week, but the defense will be ready physically, which may make it closer for a while. Shelby County 14, Moody 35

Last week was tough for the Montevallo Bulldogs, playing well enough defensively to win, but ultimately losing 7-6. They scored their first-and-only touchdown in the final five minutes, but after a failed two-point attempt, they lost by one point to West Blocton. Now, they’ll look to bounce back against Jemison in a non-region game. As long as the offense has a good week of practice in working on improvements, they’ll have a good chance to do so. Jemison is scoring just 13.3 points per game and has scored 14 or less the last three weeks, while the Panthers are giving up 31.5 points per game. Montevallo’s defense has given up 21 or less in every game and is giving up 11.5 per game, which ultimately makes the difference this week and allows the offense to gain confidence. Montevallo 27, Jemison 13

As big as last week was for the Vincent Yellow Jackets, this week may be even bigger. Sure, it’s not a region game, but after losing to the No. 5 team in the state by one point in the final 20 seconds, it’s all about how you bounce back against Class 3A Childersburg. The Jackets led throughout against B.B. Comer last week before the heartbreaking and emotional finish, but if a loss could show you that you’re one of the best teams in the state, it was that loss and Vincent has to quickly realize what they just did. This is one of the best teams in school history, and the Yellow Jackets can’t let a one-point loss send them backward to the teams of the last few years that have lacked confidence. B.B. Comer beat this Childersburg team 35-21, which means Vincent should be able to have a strong chance at bouncing back this week. The Tigers are scoring just 22 points per game and giving up 29.8, while Vincent is scoring 50 and giving up 12.4. If they use last week as fuel all week at practice and then on Friday night, they’ll bounce back and be right on track. Vincent 34, Childersburg 24

The Cornerstone Chargers are quickly becoming the favorite in the 8-man division of the AISA after a thrilling 52-50 win against Springwood in a battle of unbeatens that saw a 55-yard touchdown pass from Zeke Adams to Logan Lightsey as time expired. Now, the Chargers don’t have a game left against any team with a winning record at the moment. This week, they get a North River Christian team that is giving up 52.6 points per game, while Cornerstone just scored 52. North River is scoring 31.8 points per game, which means the Chargers need to play better defensively this week, but the offense has the playmakers to be able to make the late plays necessary. Cornerstone 44, North River 32

The offensive struggles for Coosa Valley continued last week in a 26-0 loss to Pickens Academy to fall to 0-5 on the season. Now, the Rebels get a Banks Academy team that is 2-2 and has played a challenging schedule. Banks is only scoring 12.8 points per game and will get a stingy Coosa Valley defense, but the Rebels will be going up against another tough defense, which ultimately should make the difference. Coosa Valley 6, Banks 20

Evangel will look to take down an undefeated opponent for the second week in a row this week. Now 5-0 on the season, the Lightning will get 5-0 Lighthouse HomeSchool on the road this week. Evangel has now scored 41 or more in every game and has given up 14 or less in every game. While Lighthouse is undefeated, they have been in some tight games and have given up 20 or more in every game, while they’ve scored 42 or less in all but one game. Evangel is better on both sides, and the Lightning should be able to prove that once again. Evangel 49, Lighthouse 19