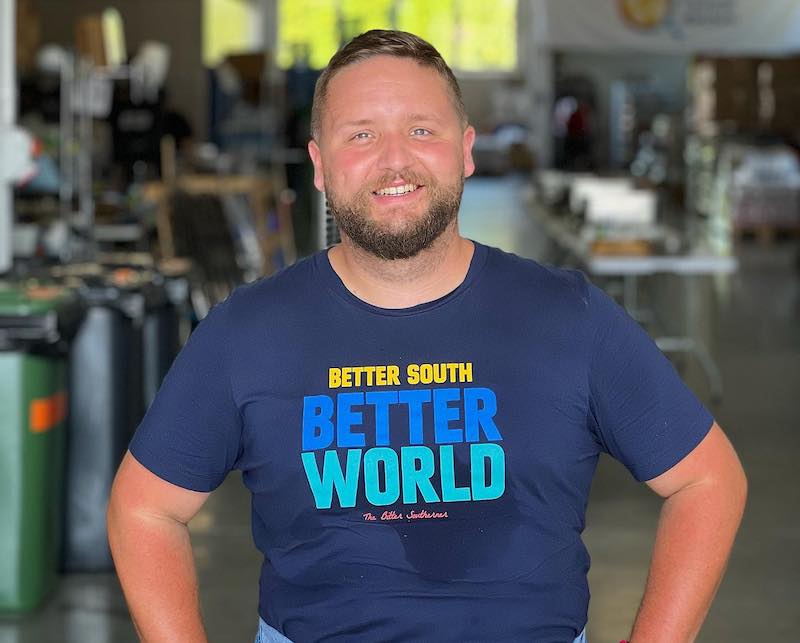 At the end of summer, Jonathan Harrison traveled to Przemyśl, Poland and assisted World Central Kitchen in providing meals to Ukrainian Refugees. (Contributed)

Following his TV debut on Fox’s Next Level Chef, Columbiana native, and chef, Jonathan Harrison made his way back to Columbiana and got back to what he loves, cooking.

Harrison held multiple local gatherings, continued to cook and expanded his private cooking events as well. However, over the summer Harrison said he felt called to help however he could following the heightening of the Russo-Ukrainian War and the displacement of over 7 million Ukrainian refugees.

After Harrison saw that Noah Sims, a friend, fellow chef and season four contestant on Master Chef, was in Przemyśl, Poland helping World Central Kitchen provide meals for refugees who had fled to Poland, Harrison hopped on a plane to Europe to assist.

“I just had the means,” Harrison said. “I figured out how to get there with some help from people in the community because it’s pretty expensive to fly on short notice. I just didn’t see a bigger need. I wanted to go help as much as I could, and that’s what I did.”

Harrison arrived in Przemyśl at the end of July and was immediately thrown into helping prepare over 2,500 meals a day.

“At one point, there were 60,000 people coming into Przemyśl every day,” Harrison said when explaining the initial wave of refugees that the town saw, “They’ve had over 2 million refugees come through the city of 40,000.”

When describing how that has impacted the city, Harrison compared it to how hurricane Katrina impacted people moving in the south, but on a much larger scale.

On a daily basis, Harrison said he and his fellow chefs were cooking the basics. Chicken, turkey, beef, soups and salads. They also always tried to have a vegetarian option available.

“I think that the big goal was to try to figure out how to make food that Ukrainian people are used to, to make them feel more at home,” Harrison said. “So cranking out borscht and things with root vegetables that Eastern European people have lived on for centuries.”

In addition to Harrison, there were around 15 chefs and an additional 35 other people helping provide the meals.

Harrison said he met a chef named Kathleen from Maine who came to Przemyśl and helped take the World Central Kitchen team from feeding 22 to 5,000.

“Just to be able to crank that out, you know, that’s amazing,” Harrison said. “She was so cool. And that’s the kind of work that’s being done over there. People taking one thing and making it positively affect these people who’ve been so displaced.”

At Przemyśl, Harrison and the others working with World Central Kitchen, would wake up in the morning and cook all day for around 12 hours.

“You just cook and cook and cook,” Harrison said. “It’s a bunch of people who have come from all over the world to help people. It’s just a concentrated effort.

Harrison mentioned many chefs who he met through the experience that helped the camaraderie.

“I met these really, really awesome people who write cookbooks,” he said. “They’re called the Wine Guys. I met a private chef from Lake Tahoe, who became a super good friend. Her name is Meredith. A vineyard owner from Northern Sonoma. Mike, who is from Pittsburgh, but he’s been in Spain the last 15 years. He has his own restaurant. You know, you meet a lot of people. Some really, really cool people.”

According to Harrison, the whole experience was perspective changing.

“It put everybody on the same level of having to leave your home, no matter who you were,” Harrison said. “I met someone who packed up their house in 12 hours and he said, ‘We’re rebuilding our life. We’re building an entirely new life elsewhere now because we have to.’”

Not only was it perspective changing, but it was also frustrating that he couldn’t do more, Harrison said.

“It’s like, OK, I fed this person today, and what are they going to do tomorrow,” Harrison said. “I guess the only thing we can do is to keep trying to feed them because that’s sustaining them to figure it out. But definitely a frustrating feeling. Like, you couldn’t help them further.”

In order to keep from dwelling on the negative thoughts, Harrison said he had to even out his thoughts and think about the positives in the situation, such as the fact he was helping people who might not have had a meal that day.

The process was eye-opening to Harrison, who is ready to help out whenever and wherever he can now, mentioning the natural disasters throughout the country that displace many as another area that World Central Kitchen goes to, and something that he is interested in helping with as well.

Harrison said those who want to know exactly where their money is going, and that it’s going to help, should donate to World Central Kitchen. Donations can be made at Wck.org.