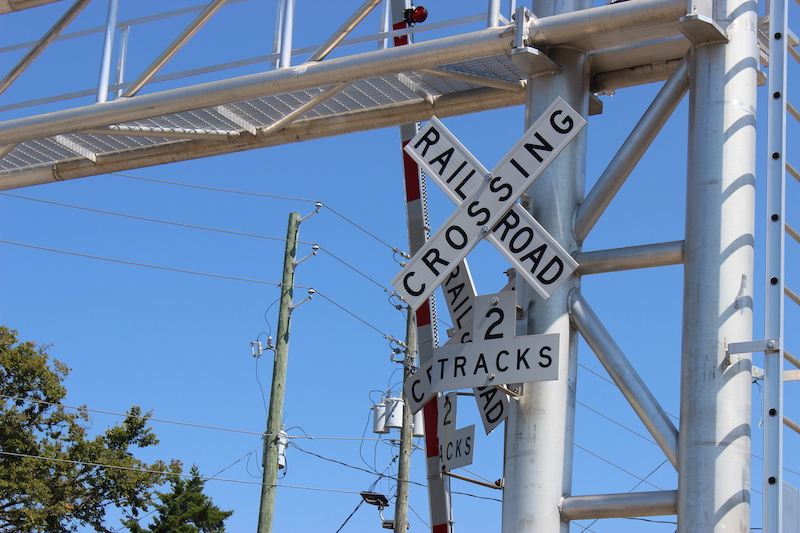 No matter what, trains seem to be here to stay. Therefore, we should try to respect what they have done for our country. (For the Reporter/Meg Herndon)

When I talked to one of our designers about creating graphics for this week’s enterprise story he said, “We’ve been talking about doing a train story since I started here, which was six years ago.”

Trains are a big topic in the county, and the discussion surrounding them won’t ever stop unless all the railroad crossings magically disappeared overnight. And even then, we’d probably still find a way to talk about them.

I grew up somewhere where the only encounter I had with trains was overhearing their occasional whistles at night. When I began this job, I immediately heard talk of being stuck behind a train. At the risk of jinxing it, I have only been stuck behind a train twice, and the second time I found a way around it.

While working at Adventure’s Coffee Co. in Calera, I can expect to look out the window and see a train stopped at the crossing by it, cars zipping around to find an alternative to being stuck waiting. In fact, while working on getting photos for my story of crossings, in a matter of 10 minutes, two stopped at that crossing.

While it is important to recognize the issues that these blockages on crossings can have, I just spent 2500 words doing that.

Now, I will highlight some of the joys that I have seen involving trains throughout the county.

One of the first events I covered on the job was the Heart of Dixie Railroad’s Pumpkin Junction. The inaugural event included a ride on a refurbished locomotive through the fall colors, which thinking about it, was probably the first time I had ever been on a real train ride.

Additionally, at the end of my day at the museum, I also got to hitch a ride on its steam-powered locomotive, one of the few left in Alabama, which used to be homed at the Birmingham Zoo.

During that endeavor, it was incredibly heartwarming to be surrounded by so many people who had a passion for trains. So many people I talked to had extensive knowledge and care for the museum and what it represents, and many were simply there as volunteers.

While that can be frustrating, and we should acknowledge and discuss how crossings have the potential to lead to terrible outcomes, such as ambulances being blocked or cars being hit, we should also take time to recognize the U.S. was in some way built thanks to trains.

Trains for many can represent joy and a thing of fascination. They represent the county and the nation when it comes to trade, as they help haul around 1/3 of all U.S. exports. As an icon of the industrial revolution, the U.S. would not be where it is today without trains.

Despite, the issues that can arise due to trains which should be fixed, much of that fault cannot be solely blamed on the trains themselves, despite the ease of doing so. Without proper funding, not much can be done.

Thankfully, with the Railroad Crossing Elimination Program, the county might see more implementations of overpasses and aids that can soothe blockages. However, it is highly unlikely that in our lifetime we will see a Shelby County with no railroad crossings. So, while I don’t think we should turn a blind to the issues that we see, we should also remember to appreciate the history we as a county have when it comes to the locomotive.