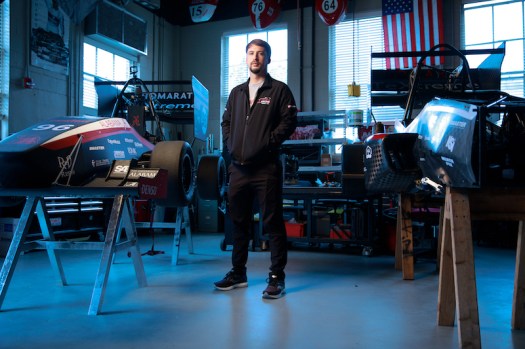 After helping to grow and lead the University of Alabama’s Formula SAE team as an undergraduate, Montevallo native Cole Frederick now serves the team in an advisory role as he works toward earning his doctorate in computer science. Frederick is currently featured in the university’s latest Where Legends Are Made commercial. (Contributed/The University of Alabama) 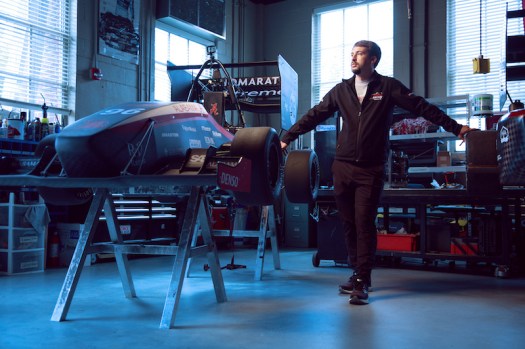 MONTEVALLO – Montevallo native Cole Frederick has spent untold amounts of time working on cars, and based on his long list of accomplishments, it was time well spent.

Frederick, 28, graduated from Montevallo High School in 2012 and left his hometown to study mechanical engineering at the University of Alabama, where he is now earning his doctorate in computer science and working with a faculty member to create software that makes decisions for cars.

Frederick might not have known exactly where the road from high school to college would lead him, but he knew cars would get him wherever he was going.

“I have had a passion for cars since an early age,” Frederick said. “My dad had cars he worked on my whole life, and my first car was a 1968 Camaro. I knew from an early age I wanted to work on cars for a living, but I didn’t figure out how that fit into my career until I arrived at college.”

At UA, Frederick got involved with Formula SAE and quickly started to make his mark in racing.

“The team was very small when I started, and I became team captain in my sophomore year in college,” Frederick said. “A great group of students, and I built the team from four to five people to 25-plus in the next four years.”

When Frederick graduated in 2017, the team achieved an all-time high of 17th place at competition. In his first two years as a graduate student, he helped the team in an advisory role and saw it place 10th overall in 2019.

“The team was able to finish fifth this year,” Frederick said. “I am so proud of the current team and the foundation that we were able to build.”

Frederick said for him and many others, Formula SAE has provided some of the greatest learning moments by allowing students to apply their knowledge from class to real-world projects.

“I don’t think any of us would be such strong engineers without the Formula SAE team,” he said. “Formula SAE taught all of us what it was like to be a project manager/engineer in the real world before leaving school.”

According to Frederick, the students had to raise much of their own money from sponsors to compete with teams that have budgets 10 times what the team had when he was in school.
“We were forced to design parts that fit our budgets, time constraints and manufacturing capabilities,” Frederick said. “It was amazing to see how every member of the team grew as an engineering student during their time on the team.”

Earlier this year, Frederick was part of a team that won the Indy Autonomous Challenge at CES, making history as the champion of the first head-to-head autonomous racecar competition.

In a private test at the Kennedy Space Center in April, the car’s software that was developed by Frederick and his team, PoliMOVE, broke the land speed record for autonomous cars, reaching a peak speed of 193.8 mph and an average speed of 192.2 mph.

For those who are not racing aficionados, Frederick underscored the point that racing has improved passenger vehicles since the beginning of cars, and noted, “That is where people spend the most time and money to improve the vehicles by the next 0.01 percent.”

“Autonomous racing will be no different,” he said. “The Indy Autonomous Challenge (IAC) has given universities the platform to change the world with research focused on autonomous racing.”

And speaking of universities, Frederick has become a poster child of sorts for UA’s excellence in various programs.

Frederick is featured in the university’s latest Where Legends Are Made commercial, which airs nationally during all televised UA athletic events.

Frederick thanked his parents, family and girlfriend for allowing him to pursue his passion; professor Dr. Brandon Dixon for helping him through his graduate degree and allowing him to take on such an interesting project; his fellow teammates on Polimove that have been more than amazing to work with; Dr. Susan Vrbsky, Allen Parrish and Dr. Paul Puzinauskas for their support throughout his college career; everyone he worked with on Formula SAE; and all others who have helped him reach his goals.

“People in the racing world are an amazing group of people,” Frederick said. “No matter where you look, there are racers that will give you the shirt off their back if you need it. I have zero regrets from working in the racing community and would happily continue to work with them in the future.”