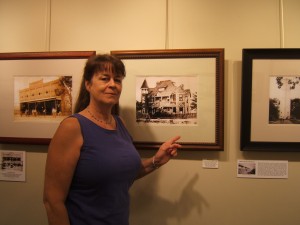 Curator Becky Crisswell points out the Kroell House that once stood on Main St. in Montevallo.

Spend a pleasurable morning or afternoon thinking of, or remembering, Montevallo — the way it used to be.

Visit the new exhibit at Parnell Memorial Library Gallery. It is an amazing collection of historic photographs called Montevallo Downtown “Over the Years.” The showing is a Montevallo Arts Council project and a part of the statewide celebration of 2010 as the Year of Small Towns and Downtowns. The gallery will be open during regular library hours until Oct. 20.

Many of the rare photos are supported by text explaining the subject’s location and significance to the history of the city.

“During the process of curating the exhibit,” said Becky Crisswell, “it just came naturally; the bringing together of various groups and people in the area. There are so many lovers of Montevallo history. Many photos were located at the Carmichael Library at the University of Montevallo with the help of archivist, Carey Heatherly. Another great source was Henry Emfinger of the Aldrich Coal Mine Museum.  Also, I attended several months of the Montevallo Historical Commission meetings, and their members were an immense help putting facts and dates together.”

Among the pictures of buildings, churches, bridges, streets and landmarks, there are several exciting photos depicting Main Street between Middle and Shelby.

That area was once the bustling hub of the city, where neighbors met and tended to all of their business within that 300-foot strip. There were, at any one time in the ’30s, ’40s, ’50s and ’60s, two grocery stores, a hardware store, two drug stores, a dime store, two or three clothing stores, a church, a doctors’ and two dentists’ offices, a bank, a restaurant, two barber and two beauty shops, a photography shop, and the Strand “picture show” where four new movies were shown every week.

“I hope the exhibit will spark an interest and have a positive impact on Montevallians,” said Crisswell. “This project was a volunteer effort on my part for the community in which I am kin to so many people that I meet…a gift, really.”

There will be a panel discussion with comments about the various photos by members of the Historical Commission on Sunday afternoon, Oct. 3 at 2 p.m. in the library meeting room. The program and a reception will follow the annual meeting of the Arts Council. The public is invited and encouraged to attend.

For information about this and other Arts Council events, go to Montevalloartscouncil.org.