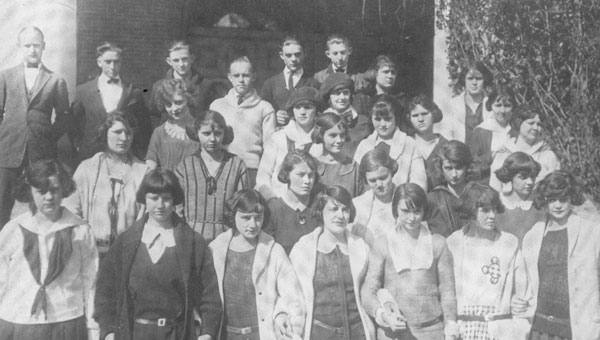 The Montevallo High School Class of 1924 as juniors.

Eleanor Nichols of Selma recently dropped in a Montevallo antique store and purchased a frame encasing a picture of the 1924 Montevallo High School class.

Realizing the picture could be of value to someone, she called the Reporter to see if we were interested in writing a story about it.

Students shown in the picture were then juniors in high school and would by now be about 103 years old; not many of those folks left.

So I enlisted the assistance of friends who grew up in Montevallo.

With Zane Nathews help we did decide that on the top row, left to right, are Frank Morgan, Clarence Long, Milton Jeter, Andrew Hoskins, Lance Hubbard and Denson Elliott.

Morgan was the husband of Sarah Ruth Morgan; Jeter was of the Jeter Mercantile Store family; Lance Hubbard followed a career with the railroad and was the father of Lois Lucas; and Denson Elliott owned the Ben Franklin store.

Lois Lucas provided great help by loaning her father’s high school yearbook. It is a wonderful record of the wit and wisdom of those young people.

Beneath each student’s picture is a verse that, I suppose, reveals something of that student’s character.

Beneath Hubbard’s picture is written: “He who should sway the gentlest girlish heart must give his own; and give it not in part.” Hubbard was voted “Handsomest boy.” Attached to Jeter’s picture: “Not afraid of work; yet not in sympathy with it.”

The class picture was made on the steps of Reynolds Hall where high school classes were held from 1922-1930.

Students attended the school from as far away as Boothton and Calera as did many out-of-town girls who boarded on the Alabama College campus.

Text in the back of the yearbook reveals MHS was an accredited school.

It also reads: “This High School offers courses in Home Economics, Commercial Courses, besides Literary which prepare the students to take up any college degree.

The school is under the supervision of the Education Department of the Alabama College, and the students have the advantages of the art, music and expression department of the college.”

Information regarding the picture is welcome.