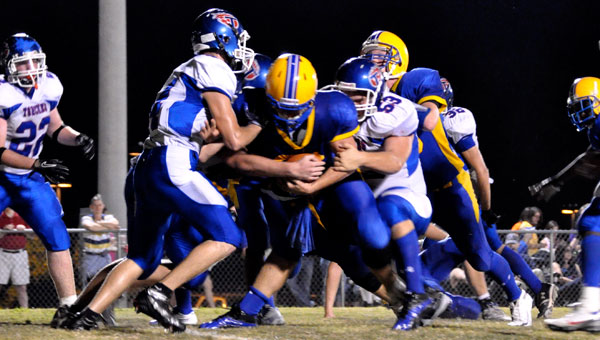 The Hope Christian Eagles recorded 320 total yards of offense as they rolled over the visiting Tabernacle Christian School of Gardendale Sept. 24.

“I am proud of every one of our players and coaches,” said Hope head coach Mark Rettig. “We were concerned about Tabernacle, because we knew they would be bigger and stronger than us.

“But our guys played with a lot of heart. They were better focused,” Rettig added. “They earned a win tonight, and they have been earning it all week.”

The Eagles struck early in the first quarter with a 27-yard touchdown pass from Zac Hughes to Terrence Moore. Hughes added the two-point conversion, bringing the game to 8-0.

After recovering a Torch fumble, Hope scored again on a 7-yard Hughes run.

Tabernacle then answered back with a touchdown and two-point conversion, but Hope added another touchdown late in the first quarter, bringing the game to 20-8.

The Torches closed the gap in the second quarter with a touchdown, but Hope’s Eric Spence scored shortly thereafter on an 8-yard run. Spence also added the two-point conversion.

After Hope’s Phillip Defreese sacked the Tabernacle quarterback and forced a fumble, Andrew Whitson recovered the ball, setting up another Eagle touchdown in the second quarter.

On Tabernacle’s next possession, Moore intercepted a Torch pass in the end zone and ran it back 80 yards to score.

“That was just a game-changing play,” Rettig said.

Hope added another pair of touchdowns before the half after recovering two on-side kicks, making the score 52-14 at the half.

In the third quarter, Hughes again connected with Moore on a touchdown pass, and Spence added the two-point conversion.

Tabernacle’s last touchdown and two-point conversion of the game came late in the third quarter, bringing the final score to 60-22.