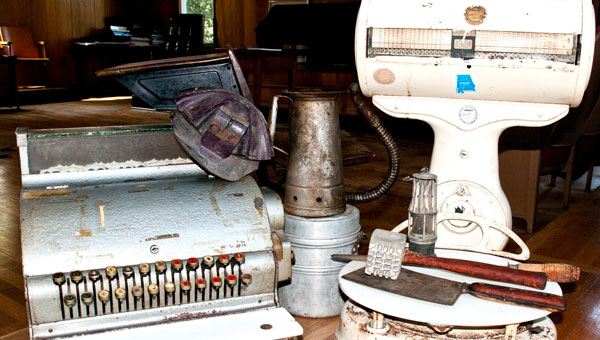 In economic times such as these, it has been very slow going for the planned museum in the old Masonic Lodge. However, Ken Penhale, a local historian who may have the biggest vested interest in the project as well as collections he has assembled over a lifetime to put on display, was able to show me a few of the items donated to the city.

There is a pew, possibly dating back to 1882, from the basement of the Methodist Church on Second Avenue West. This church was demolished in the 1933 tornado and rebuilt on the same foundation.

There are World War II Army uniforms from Col. Tom Stubbs, donated by his family.

Other items include a school desk from the Helena High School, an old iron stove and some recently acquired items from Mullins Grocery donated by Kenneth and Irene Mullins.

A large weighing scale, instrumental to daily purchases, and butcher items — a cleaver, knife sharpener, and mallet — and the now quite old-fashioned metal receipt cabinet with individual spring clamps lined up on metal pages. This would have held the charge accounts.

A manuscript from the Federal Writers Project written around 1938 by Woodrow Hand mentions Mullins Grocery and details the life of Helena truck miner, Johnnie Gates. You can find it at Faithfabric.com/lifehistories/Alabama/13johnnie_gates.htm.

There is also a miner’s cap and small gas lantern that belonged to Irene (nee Siddons) Mullins’ father.

The intricacy of the cap — leather bands topped by a metal cap that looks like an upside down brioche pan, the front fastener that would hold a lamp in place — all appear a way flimsy contraption to protect a man whose life might be at stake a mile underground.

Pointing from the second floor of the Masonic Lodge, Ken Penhale indicates the vacant lot next to The Monkey Basket that was once the site of Nash Drug Store. The original building was demolished in the 1960s.

“There are three of us — Billy Dean Harris, Jimmy Bramblett and me — who remember seeing three or four old slot machines upstairs in the back,” Penhale said, recalling he was about 13 at the time.

“They were called one-armed bandits and were probably quite popular with the mill workers and miners.”

Penhale has a copy of the business license issued on Jan. 24, 1917, to owners Tom Nash and Jack Griffin for $7.70. It specifically states: slot machines, drug retail, soft drinks and cigaretts (sic).

By the end of 1917, the federal government would hastily enact the War Revenue Act, a “snack tax” to raise money for WWI, as soft drinks and candy were considered “minor luxuries.”

Cooking among Oehrlein’s many interests

Dr. Chuck Oehrlein has an eclectic collection of cookbooks. From Fanny Farmer and Craig Claiborne to the ‘Anniversary Slovak American... read more