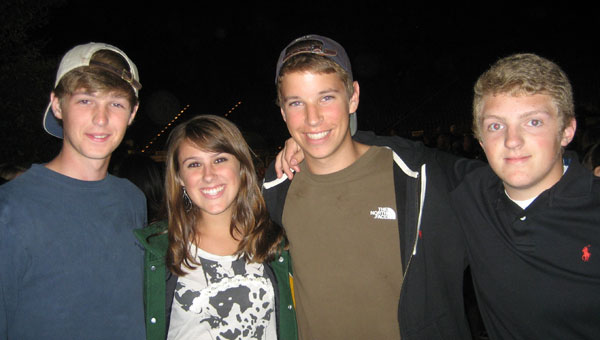 “PHS is awake!” The juniors’ pep rally sign sporting these words seemed appropriate after the Awakening event at the Verizon Wireless Music Center in Pelham.

And our pep rally didn’t seem so much like a class competition as it did a celebration.

He has his hands full. And PHS is a public school.

What sort of revival emanates from a public school?

The truth is revivals don’t come from schools or coaches or even youth ministers.

Revival comes when one person recognizing spiritual hunger and pain says, “I can’t open eyes to what’s really important. God help us.” When that man is Burnett, and the man he asks for help is Sisk — a man who shares with Burnett a heart for God and a strong commitment to Pelham High School students — a powerful prayer walk begins.

The venue was arranged, speakers secured and popular bands booked — all for free.

Fliers and a website materialized. Excitement grew, crowds came and lives were changed.

PHS Junior John Menke said, “The awakening was just what I needed to get turned around in the right direction.”

Sisk told Tuesday’s crowd, “Brett Burnett and I have prayed that God would move in a mighty way. God has answered our prayer and it’s beautiful.”

And is our school changed? Senior Brandi Hill said, “We have more students at FCA and students are talking about God.”

Junior Nolan Vinson said, “I was awestruck by how many students and parents came. I don’t hear cursing in the halls anymore and our school is a cheerier place.”

Our awakening didn’t happen on the school grounds.

Our awakening began in a few precious hearts, shifted our community’s spirit and transformed us into people who choose to live differently.

Author Watt Key (Center) recently made his second visit to Pelham High School to speak to students about his new... read more