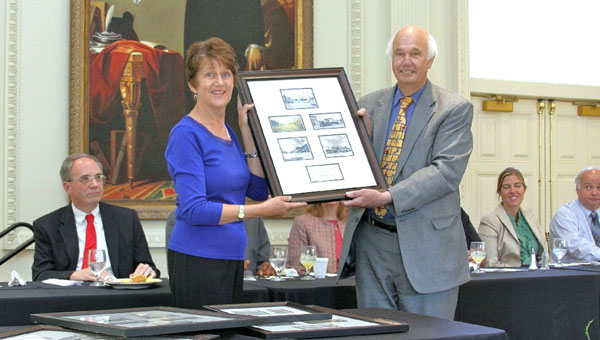 Walker gave an inspiring talk stressing the wonderful spirit, pride and volunteerism in the Montevallo community, and the fact that we all have many “hometown heroes” in our lives.

Mayor Ben McCrory recognized each of the honorees with an award inscribed in a frame with several pictures of downtown Montevallo.

Walker is the founder and chief executive officer of the American Village. The Village opened in 1999 and serves some 40,000 students each year, teaching American history, civics and government, inspiring them to be good citizens and leaders. Walker is a graduate of the University of Montevallo. The mayor thanked him for his tireless service, his vision and dreams and their contribution to the city.

Lightfoot is a native of Montevallo, the son of Robert and Gene Lightfoot, and a graduate of Montevallo Elementary, Middle and High Schools. He holds a University of Alabama degree and is in the Alabama Engineering Hall of Fame. He is the director of the Marshall Space Flight Center in Huntsville. McCrory said, “We honor Robert as one of our “hometown heroes” for being an example to our city, our schools, and his family for the achievements he has thus far accomplished.”

Lovelady was honored posthumously. “Strong, unaffected, straight forward, honest and giving,” said the mayor in describing her. “She is recognized because of her lifelong love and loyalty to UM, her alma mater, and because of her love for, and tireless service to, her community. She was elected by the UM National Alumni Association to be the 2010 recipient of the Alumnus Loyalty Award.”

Edwards was also honored posthumously. He served admirably on a submarine in World War II, graduated from Auburn with an engineering degree and retired from Alabama Power Company. “Even though Jim retired from employment,” said McCrory, “he never retired from service to his community. His volunteer efforts included Meals on Wheels, his church, and the American Village. Jim pitched in wherever he was needed. We honor him with praise for all he gave to the citizens of Montevallo.”

Following the breakfast, the high and middle school students present were the beneficiaries of a rousing address by Treva Medberry, who is the officer for educational initiative at the American Village.

A make-believe victim of an automobile accident is checked out by paramedics in Chelsea Community Church’s Haunting Truth production last... read more