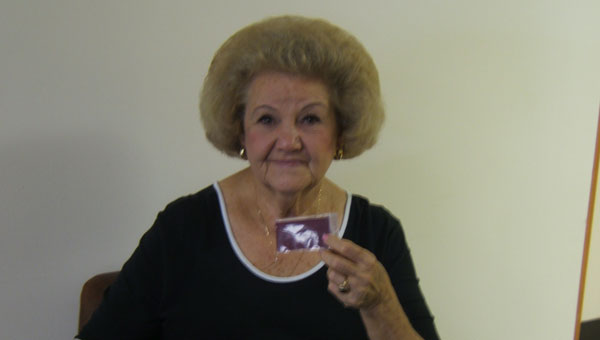 During the year that Pvt. Kyle Brule, 20, of Dacula, Ga., served in Afghanistan, he was often in some very dangerous situations, but he always relied on his faith and the steadfast support of his family and friends.

Brule is the grandson of Carolyn Wolfe of Montevallo and the son of Gay Riffe Lands. When he was deployed, Wolfe gave him a small prayer cloth that had been anointed with healing oil and prayed over, and told him to always keep it in the right breast pocket of his uniform; it would keep him safe. She had no idea he would, but later he confessed that he had kept it in his shirt pocket all the time he was in Afghanistan.

On his return to the U.S., in an interview for a story in The Paper (Braselton, Ga.), he said, “I think that’s one of the main reasons I came home safe and sound; because Nana was looking after me.”

Wolfe had so much faith in the prayer cloths and so much concern for the soldiers in Afghanistan that she initiated a program of support, not only for Brule, but for the men serving alongside him.

With the help of many churches in the area, including her own church, Dogwood Assembly of God, two boxes were sent every week to Brule. Besides more of the prayer cloths, she sent a box of food and one of hygiene supplies. Wolfe explained that the men were routinely furnished only one hot meal a day and that they became very excited over the canned chili, grits, oatmeal, non-perishable dinners, candy and cookies.

The personal hygiene supplies were also very welcome; wet wipes, toothbrushes, toothpaste, eye drops, facial wipes, shaving accessories, etc. It seems that those things are not regularly supplied by the Army and are not easily available. As Christmas approached, Wolfe sent holiday food and decorations; even an inflatable Christmas tree.

“Without so much help from the churches,” she said, “I could not have done it. Churches as far away as Jemison helped us and our church even took up a special offering on the fourth Sunday nights to pay for the postage.”

Wolfe is extremely proud of her grandson. He expects to be sent back to Afghanistan in December and Wolfe plans to resume her project of support for the men who are so diligently protecting our country.