Students learn from the ‘Walking Dead’ 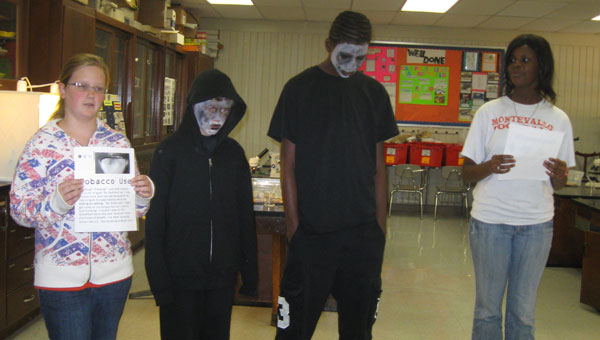 A recent walk down the halls of Montevallo Middle School left no doubt that something big was going on. The decorated hallways, warning signs, and oddly dressed students were not a celebration of Halloween, but were evidences of Red Ribbon Week, a campaign against the use of drugs, alcohol, tobacco and bad decisions.

The crusade was a project of the Ambassadors and the Students Against Destructive Decisions.

Every day of the week there was a different emphasis and teachers included drug-free topics in their lesson plans.

On Monday, students were encouraged to wear red clothing. RRW stickers were given out and a large banner was hung in the lunchroom for students to sign as a visible pledge to remain drug free.

Thursday was Drugs and I Don’t Mix day with students wearing mismatched outfits to support the idea that drugs and they don’t mix. There was an assembly also with a speaker from the Shelby County Task Force stressing the very real danger of crystal meth.

The week’s finale on Friday brought the “walking dead” to the hallways and to each homeroom. Ambassadors were dressed all in black with zombie-like make up and silent lips.

The “dead” stood quite dead, as a member of the Leaders of Tomorrow told the heart-wrenching stories of how and why they died – an effective demonstration to a quiet and attentive audience.

“Red Ribbon Week is a nationally sponsored annual event that is meant to bring awareness to the severe consequences of drug abuse,” said Ambassadors Advisor Audra Edwards, “At MMS, we make a collaborative, concerted effort to educate students of the devastating effects of drug, alcohol and tobacco abuse, as well as many other destructive decisions. We have some activities that are fun for the students, but the real focus is on the seriousness of making good choices – choices that will affect the futures of these kids. They hear a lot of “Don’t do drug” messages, but they don’t always hear the facts of why they shouldn’t. During Red Ribbon Week, we try to clear up some myths, raise awareness, and encourage strong, positive choices.”

The band U.S. performed at the 2010 Jammin’ at the Junction. (L-R) Kelly Nagy, lead vocals and guitar, and Joey... read more