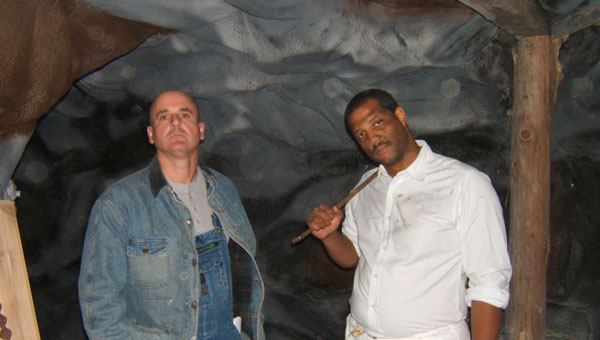 Actors in the roles of coal miners talk outside the simulated mine shaft at Aldrich Coal Mine Museum.

“It was a safe way to shoot the scenes with actors and crew and it was a blessing we came across Mr. Emfinger’s museum. We were running out of options,” said Kevin Wayne, director and star of the film, “Company M: A Mob of Soldiers.”

The statement was an explanation of why Black Scorpion Films came to Aldrich Coal Mine Museum in Montevallo to film scenes for its latest movie.

On a recent Sunday afternoon, activity in the museum was not unlike Hollywood; with actors rehearsing their lines; a makeup artist smearing coal dust all over the shirts, pants and faces of the would-be coal miners; cameramen setting up their equipment; and directors busily running from one group to the another giving orders and doing whatever directors do.

The actual filming was done in the long dark and eerie tunnel of the simulated coal mine inside the historical company commissary.

Once inside that tunnel, it’s easy to imagine the working lives of the men who would have labored there.

As described by the production company, “Company M” is an independent short film based on historical events in 1920s Alabama.

Set in Walker County in the era when coal miners fought for better lives and mine owners had government in their pockets, “Company M” tells the story of one mine worker’s death at the hands of soldiers; a single tale that distills a much larger truth.

The idea for the movie came to Wayne in 2003 when he and a friend stopped by the Slick Lizard restaurant near Nauvoo, in Walker County. The walls were decorated with old pictures, newspaper clippings and a plaque commemorating the almost-forgotten story of the “The Lynching of Willie Baird.”

“Company M” is the story of that murder.

Henry Emfinger of Aldrich Coal Mine Museum is excited about the film and the exposure it gives the museum.

“It’s just great,” he said. “They had finished everything except two or three mine scenes, so they visited several coal mines, but had not found a suitable site; then they heard about us, visited our simulated mine, and were thrilled that it was just what they were looking for. The publicity will be good for the museum and maybe more people will come to visit.”

The projected date for the premier of “Company M” is February or March of 2011.