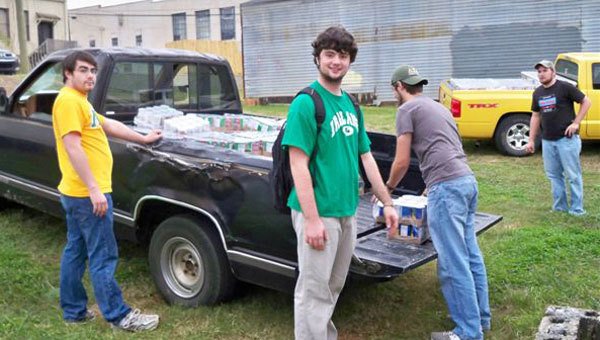 For the past 18 years the Lambda Chi Alpha fraternity on the University of Montevallo campus has held a food drive as they participated in their fraternity’s North American Food Drive and fulfilled their slogan of “Brothers Feeding Others.”

This year the local chapter far exceeded their goal. They collected and donated to Shelby Emergency Assistance the equivalent of 28,000 pounds, or 14 tons, of food for the area’s families in need.

“These guys have done an awesome job collecting food in the neighborhoods,” said Karen Pendleton, director of SEA. “It’s a great story of how the university students and our communities work together.”

Jake Finn, director of the local drive, explained that last year their chapter ranked No. 14 in the nation with a collection of 7,400 pounds of canned and non-perishable food. The current tallies are not in, but they hope for an even higher ranking this year.

According to Lambda Chi’s website, the international North American Food Drive has, in its history, provided more than 32.5 million pounds of food for needy families in local communities.

In November of each year, the fraternity members leave bags at the front doors of neighborhood residents requesting that the bags be filled with food donations to be picked up on a scheduled day.

This year the UM fraternity collected food in both Montevallo and Calera neighborhoods. They also occupied a booth in Lucky’s Foodland entranceway for donations. This is the first year they were able to accept cash gifts, and each $1 donation equated to 7 pounds of food.

“I feel great,” said Finn. “Our goal was 15,000 pounds and we far exceeded that. I am really proud of our brothers, and of these communities.”

Chris Estes, assistant drive director, explained that he understood that the 28,000 pounds of food would supply SEA’s pantry for a six-month period — a source of great satisfaction to every one of his 52 fraternity brothers who worked many hours soliciting, collecting, sorting and finally stocking the pantry shelves.

Cynthia Shackelford, director of UM public relations, said she was absolutely stunned with the success of the food drive, but that it confirms this fraternity has a fine reputation for community service as well as academic achievement.

Not slowing down at all, the brothers have already selected Andrew Lawrence as next year’s food drive chairman. Their 2011 goal is 30,000 pounds of food, but their dream is to double their collections each year.

The Arc of Shelby County honored the Brown family as a 2010 Family of the Year. (Front row, L-R) Gwen,... read more