Santa Claus has stories to tell 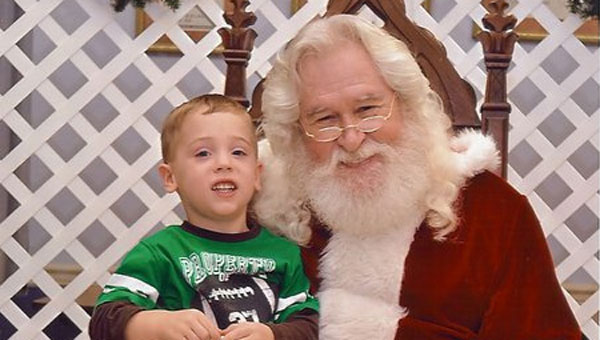 When Santa Claus was asked to come to Montevallo for the Christmas parade, he accepted with a big, “Ho Ho Ho” for there’s nothing he’d rather do than fill the role of that jolly old man.

“God gave me a full head of white hair, a bushy beard, and this big belly,” he said, “I was meant to be Santa.” He sometimes goes by the name of Jack Key, but for the past 15 years he has been Santa Claus. “I don’t play Santa,” he said. “Once you put on the suit, you are Santa.”

He shared two stories that reveal just why he loves that task.

“One night at a party for underprivileged children,” he said, “I was enjoying the kids sitting on my knee and telling me what they wanted for Christmas. As one little girl approached, I noticed her beautiful but solemn face. Being my usual jolly self, I asked her what she’d like for Christmas. Without even blinking or smiling, she said, ‘Santa, I want my mommy and daddy back.’ You could have knocked me over with a feather. I was not prepared; I was mush. I gave her a hug and said I would surely try and do just that. Then I cried all the way home.”

He tells a happier story of a little 4-year-old who, at first, seemed too shy to approach him. He greeted her with, “Well there she is! I have been waiting for you.” Instantly the child ran and almost leaped into his arms. She started gently pulling on his beard and playing with his glasses and curly white hair. When he asked what she wanted for Christmas, she screamed “toys!” He asked if she knew the names of any of his reindeer and she answered, “I know all of them,” she said. “They are Randolph ….uh….Satson and Datson.”

When Santa could stop laughing, he assured her that he was so proud of her for learning their names and that he would surely bring her some toys for Christmas.

She hugged him and as he handed her a candy cane she asked for one for her little brother.

When her mother took her hand, the little girl looked back and said, “Santa, can I have one for my big sister too?” Her mother turned quickly and said, “No! You don’t have a little brother or a big sister.” The child just smiled and said something that Jack Key can never hear often enough… ‘Mommy, that’s the real Santa!’”

Members of Cub Scout Pack 353 enjoy community service projects such as this one where they collected donations to help... read more