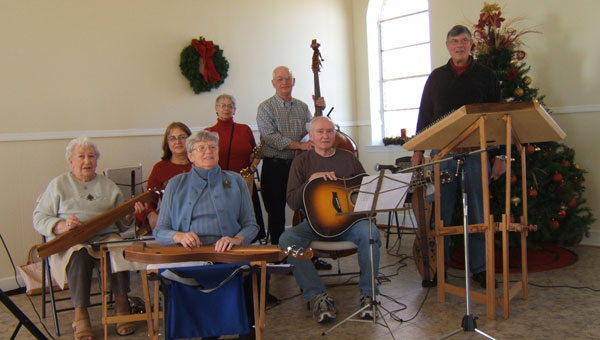 On Tuesdays from 3-5 p.m., lilting notes of music can be heard coming from University Baptist Church. A look inside will reveal Bob and Sallie Sutton, along with eight or 10 friends, joyfully playing folk tunes on dulcimers, penny whistles, guitars, and fiddles with Bob singing along. One could guess they were answering the call to “play me some mountain music like Grandma and Grandpa used to play.”

Bob explained how they happened to be there: “About two years ago,” he said, “Sallie and I joined the Southern Appalachian Dulcimer Association. The 300-member SADA has been in existence for 36 years. They meet at the Bethlehem Methodist Church in Hueytown once each month. They also host a festival at Tannehill Ironworks Historical State Park the first weekend in May. At the festival, they enlist members from not only the greater Birmingham area, but from all over the South.”

The Montevallo group is fairly new and is a splinter of SADA. Sally and Bob had enjoyed playing with the Hueytown group so much that they wanted to play more often, and since the practice sessions of SADA were in Trussville and too far for them to travel on a regular basis, they decided to form their own group.

Currently they have about 12 members and want to add to that number. The larger the group, the more volume, better timing, better quality and more fun. Anyone who plays, or wants to learn to play, a traditional stringed instrument and enjoys traditional music is encouraged to get in touch with Bob Sutton at 668-0659.

The average mountain dulcimer is a simple instrument; has three or four strings, a bass string, a string in the middle and one or two melody strings. The dulcimer always carries the melody. The typical drone sound is beautiful and resembles that of the bagpipe. Dulcimers are fairly easy to play, and can be quite inexpensive.

Recently the Montevallo group played for the seniors at Providence Church between Montevallo and Jemison. Some of the songs they played were: “Amazing Grace,” “I’ll Fly Away,” and “Sweet Hour of Prayer.”

The dulcimer players perform at senior centers, nursing homes, churches, schools and special events. There’s no charge, but they just might accept donations. Those interested in scheduling performances should call Sutton.

More information about the two organizations and dulcimer music in general can be found at Southernappalachian dulcimerassociation.com or Everythingdulcimer.com.

Agnes Pool of Wilsonville has loved making one of her favorite hobbies into a local cottage business out of her... read more