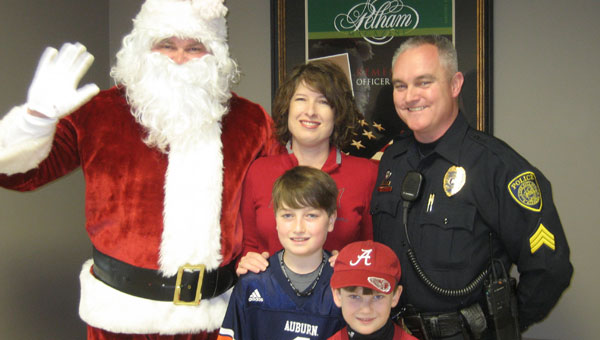 Santa joins Shannon Cheatwood, Pelham Police Sgt. Pat Cheatwood and their sons Nicolas Cheatwood (Front left) and Zachary Cheatwood (Front right) at the police station. The family recently helped organize Operation Santa Assist to give back to a pair of families in need.

Working through Shelby County DHR and local churches, two Pelham families were chosen to receive holiday help. Santa arrived at the police station thankful for the department’s assistance and ready to load up and deliver.

So how is it that Pelham Police officers have become Santa’s helpers? Reports vary. Everyone agrees that this effort began in response to the department’s tragic loss last year.

“Pelham Police Sergeant Pat Cheatwood and his wife Shannon were really the driving force behind helping a needy family,” said Police Chief Tommy Thomas. “All of us were immediately on board. Our need to do something grew out of our deep sense of loss after Philip Davis’ death.”

With so much loss that this close knit group of officers could do nothing about, they were renewed by the opportunity to provide a happy Christmas for one family.

“That’s one of the main reasons that I’m a police officer,” said Pelham Police Capt. Larry Palmer. “I wanted to help people who couldn’t help themselves.”

“After Philip’s death, the outpouring of love from the community reminded us how much people care,” Palmer added. “We needed to help a family to deal with our grief.”

Losing PHS sophomore Nathan Dunn has underscored that message for our community. The significant losses of several families remind us how hard the holidays are for those experiencing grief.

The department sets a great example for finding Christmas joy.

“The joy we experience from giving to others is amazing.

As a society, we’ve lost touch with what’s really important,” Palmer said. “We’ve got to get back to our faith.”

Maybe you received the gifts on your wish list, but the truth is that happiness is not to be found in a netbook, an iPod Nano or even a Pillow Pet. The secrets of happiness are found in giving.

Next year, the Pelham Police Department hopes to expand Operation Special Santa Assist. As the 2011 holidays approach, the Department will alert the Pelham community when the opportunity for sharing the joy arrives.