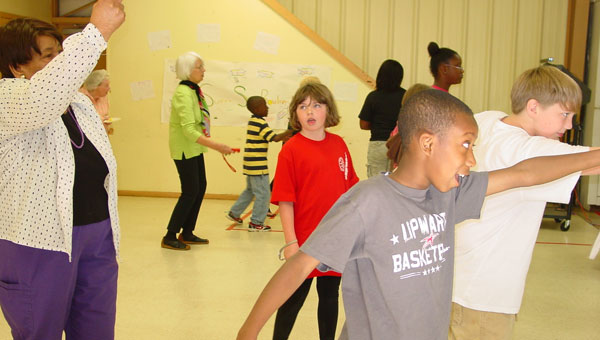 One could not tell whether the Montevallo children or the seniors were enjoying themselves more as they played games together in the five-lane Wii bowling alley during the recent awards celebration of the competition between teams of the Sunrise-Sunset bowling league.

Freda Shivers, director of the Boys & Girls Club, explained that the purpose of the activity was to bring the kids and the seniors together to interact while doing something that’s fun. She added that because the seniors have left their center in Orr Park before the club members arrived each day after school, most hadn’t met their teammates until the awards ceremony.

The seniors had played during their regular hours, and the club members did the same.

Individual bowling scores were carefully recorded for a set time period, and then all were combined to determine winners.

Club member Sydney Selman said, “We had lots of fun; bowling is my favorite Wii game, and we loved being with the seniors because we don’t see them much.”

McKenna Dubose had fun, too. She bowls often and shyly admitted, “I’m kinda good, too.”

The older players reflected the same feelings. “I’m new to the Wii games,” said Tommy Lawley, “and I learned so much because the children helped me.” Pearl Cardwell said, “It’s such good exercise, and playing with the kids was fun; they show so much love.”

All of the seniors regularly participate in an exercise program led by UM kinesiology student, Jennifer Zimmerman, on Wednesdays and Fridays at 9:30 a.m. in the Senior Center.

For information regarding the Boys & Girls Club, email fshivers@bgcca.org or call 665-4466.