Vegetable gardening is making a comeback. That is unless you are one of the loyalists who never let it go and for whom the early spring ritual of preparing the beds and planting early crops comes as naturally as the rain falling on them.

The upsurge of interest in raising vegetables, demonstrated locally by Jones Valley Urban Farms and nationally by Mrs. Obama’s third year’s planting of the south lawn White House garden with D.C. students, has caught the interest of many.

In Helena, off Second Avenue, I spotted a sunny spot containing several small raised beds and learned that this is the project of Michael Johnson and his daughters, Jaspar “Jazzy” and Sage.

Michael said he grew up in a household where a snack meant chickpeas and water. He has broadened his own scope to include all things vegetable for his girls, and they love greens and dance a jig at the mention of brussel sprouts. 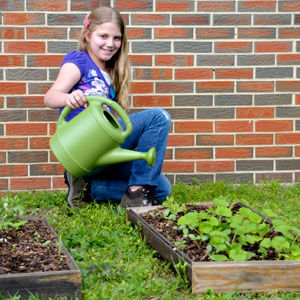 In each container is planted a central herb, such as peppermint thyme, surrounded by radishes, onions, carrots, zucchini, lima beans or asparagus. The asparagus will take a couple of years to become harvestable, but that is something for the girls to anticipate. Pole beans are trained on their fence and Johnson will trellis his watermelon vine, saying the melons can support themselves growing vertically.

One of the family’s and Jazzy’s favorite snacks is radishes dipped in hummus.

“And you know, cauliflower looks like the ghost of broccoli,” she added enthusiastically.

In their generous backyard, Jan and Charlie Holliday have been tweaking their 30’x60’ garden over the past couple of years, making adaptations as they learn.

Jan Holliday enjoys trying unusual varieties, such as the long, thin Asian eggplant, tri-colored zucchini and miniature yellow watermelon. She starts her seeds in the basement under grow lights, hardens them with a week or two of outdoor exposure, then they go into the garden mid-April.

“One of my favorites is a tiny French cantaloupe. They look like big softballs. Unfortunately, it is also favored highly by the rabbits, so this year we added a rabbit fence, since they chose to ignore the electric fence last year,” Holliday said.

Each year Holliday experiments with a different selection of heirloom tomatoes — not always with success — but their wonderful taste keeps her trying. Favorites are Cherokee Purple and Black Cherry. This year she is trying Aunt Ruby’s German Green and Green Giant, Aunt Ginny’s Purple, Marble Stripe, Black Zebra and Siletz — an early maturer in 52 days.

Holliday is noted for sharing her plants with friends.

“I gifted my Believe It or Not starter plant, whose fruit is supposed to weigh two pounds, to a special friend who requested a sandwich tomato,” she said.

Zumba phenomenon on the rise

Instructor Merri Gwin leads a Zumba class. (Contributed) By LAURA BROOKHART / Community Columnist Are you one of the few... read more