There was a huge celebration in Gail Knight’s house when she received the notice that she had won tickets to take her two grandchildren — 5-year-old LaTeria and 13-month-old Julian, and their mother, Julia Craig — to the 2011 White House Easter Egg Roll.

Gail had entered the online lottery, along with nearly 50,000 others for four of the 30,000 tickets for the largest pubic event at the White House. She was a little skeptical, but being the optimistic soul she is, gave it a try, and won.

They drove to Washington for the April 25 festivity. The Egg Roll is always held on the Monday after Easter, and is an all-day affair.

“I was impressed that it was so well organized,” said Gail. “We were divided into groups and given such good instructions that we had no question about what we were to do next.” 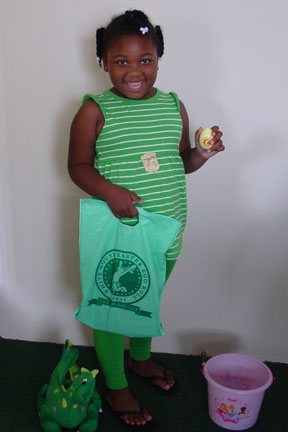 LaTeria Craig proudly shows the commemorative wooden egg she was given at the 2011 White House Egg Roll. (Contributed)

She explained that in addition to the two hours they spent on the front lawn where the egg roll and the egg hunt were held, they went to a brunch, played games and were entertained by celebrities.

“I liked climbing the wall on the obstacle course,” LaTeria said, “and the circle of colors where you jumped from one color to another. I loved the Science Kid and Clifford the Dog. I saw President Obama’s girls, and oh, I saw Bo, too.”

For Gail, the best parts of the day were seeing the President strolling around visiting with the crowd, and seeing and hearing Willow Smith sing “Whip Your Hair.”

Although Abraham Lincoln’s son, Tad, hosted the first documented informal egg-rolling party in 1861, the event, as we know it, is a tradition of 133 years and is thought to have started as a mostly family affair by President Rutherford B. Hayes.

This year, the celebration was hosted by the First Lady, who assigned it the theme, “Get Up and Go,” based on her “Let’s Move” initiative encouraging good health and active living to combat obesity in children. Evidence of the theme was in all of the components of the event. There were stages set up with opportunities to participate in activities relating to healthy living.

Many of the stages were manned by such celebrities as Al Roker, Kelly Ripa and the Harlem Globetrotters.

At the end of the day, every child received a commemorative wooden egg with the logo of the 2011 Egg Roll. LaTeria is so very proud of her egg, and she knows that it will help her remember her wonderful Washington adventure.

By BETH CHAPMAN / Community Columnist When you visit Highway 280 Paint and Body, you get more than quality service... read more