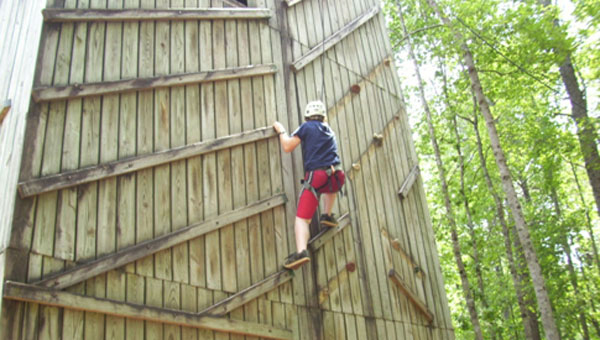 The campers earned a total of 23 merit badges toward their Eagle Scout status, which is the highest rank in Boy Scouts. The badges were in archery, climbing, fingerprinting, fly-fishing, geology, law, orienteering, rifle shooting, shotgun shooting, wilderness survival and swimming.

Edwards explained that four of the scouts (Ryan, Jacob, Robbie and Zach) completed their hunter’s education course. It required them to have gained, or to be presently working on, the archery, rifle shooting, shotgun shooting and fish and wildlife management merit badges, and, for each, to have completed a two-hour class in which they had to take a test.

Some of the highlights of the trip: Hunter completed the one-mile swim. Mason earned the top shot award in shotgun shooting, hitting 48 out of 50 moving targets. The troop earned first place in camp site inspection for having a clean camp, the tents in order, flying the American, troop and patrol flags; building a gateway into their camp; and building gadgets such as garbage cans and clothes lines.

The summer camp was not all about hard work, and the boys did many just-for-fun things after their merit badge classes. They went fishing, played on the waterslide and went to a place called Adventure Valley. They panned for gold, hiked, made ice cream, went rock climbing, swimming and canoeing.

“The Boy Scouts always have a great time at camp,” said Edwards, “and they get to learn to take on responsibilities as a group and as an individual. They enjoy the camaraderie of being with the other Boy Scouts singing camp songs and eating camp food in the dining hall. Our boys can’t wait to go back to camp next year.”

Troop 525 meets twice a month on Tuesdays at 6:30 pm at the Boy Scout Lodge in Orr Park. Among their many other activities, they go on a camp out or hike once a month when the weather permits.

Past, future meet at Lester’s Chapel